Mark Hamilton was the killer of S.A.R.A. engineer Thomas Segan in Houston, We Have a Problem (Case #8 of Travel in Time).

Hamilton is a 33-year-old astronaut working for the Space and Aeronautics Research Agency (S.A.R.A.) and the intended first man on the moon. He has short black hair and black eyes. Hamilton is seen wearing an orange and blue suit with rolled-up sleeves, a zipper and a logo of S.A.R.A. on the right lapel, a mission badge on the left lapel as well as two space badges on the sleeves. Additionally, he wears a blue belt. It is known that Hamilton is fit, drinks Moonbeam and wears army boots.

Hamilton became a suspect after Zara and the player found his helmet on the victim's desk. Calling Segan "nerdy", he told the team that Segan looked up to him. He then told Zara that he was not worried about the mission being postponed as he had faith in his destiny.

Hamilton was spoken to again about his resentment against the victim. He explained that Segan was so focused on his research that he never took the time to focus on him, the one who was going to the Moon. Everyone else bowed down to him, but Segan saw him only as another test monkey.

In the end, it was proven that Hamilton was Segan's killer. He admitted to the murder, saying he did it to prevent him from going to the moon as he was scared. When Segan walked in on Hamilton trying to sabotage the launch pad, Hamilton got the idea of killing him with a defibrillator shock to the head to stop the mission. The team then handed over Hamilton to FBI agent Bucky Johnson. Post-trial, it was discovered that Hamilton had hidden the key to the main control panel as a last-ditch attempt to stop the mission. 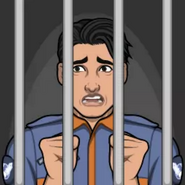 Hamilton, handed over to the FBI for the murder of Thomas Segan.
Add a photo to this gallery

Retrieved from "https://criminalcasegame.fandom.com/wiki/Mark_Hamilton?oldid=514235"
Community content is available under CC-BY-SA unless otherwise noted.