"Papa" Mario Fortuna was the victim in Civil Blood (Case #32 of Mysteries of the Past).

Mario was a businessman and community pillar within Crimson Banks. He had graying black hair, brown eyes, and donned a red coat over a white shirt and blue vest.

Mario was found dead in a wheelbarrow by the market street, wrapped in an Italian flag garland. Per Dick, Mario died after being strangled with the garland—which was filed as the murder weapon—during the night. He also found traces of pizza sauce in the garland, which meant that the killer ate pizza.

Mario planned to have the delicatessen belonging to his brother, Luigi Fortuna, demolished and replaced with a casino. Ironically, the delicatessen was where Mario was murdered. Fellow businessman Kieran Quinlan met with Mario to discuss how they could protect themselves from the hostilities of the Irish-Italian feud. Mario caught plumber Bridget Baker trying to fuel the feud by selling stolen bullets and threatened to have her locked up. Mayor Cornelius Castletown served with Mario on the Concordian City Council. However, the two were engaged in a rivalry, with Mario claiming that Cornelius had somehow rigged the votes of his re-election in his favor.

The killer turned out to be Kieran.

After admitting to the murder, Kieran said he was sick of Mario having a high reputation despite him working just as much for the community. Because of his grudge, he strangled Mario with the flag garland and wheeled him to the market for display. Judge Lawson sentenced him to 25 years in prison. 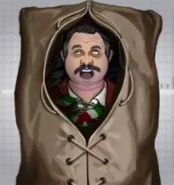 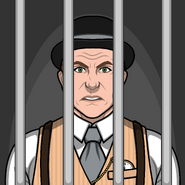 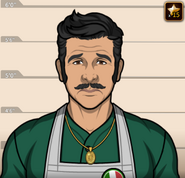 Luigi Fortuna, Mario's brother.
Add a photo to this gallery

Retrieved from "https://criminalcasegame.fandom.com/wiki/Mario_Fortuna?oldid=472182"
Community content is available under CC-BY-SA unless otherwise noted.