Maria Sanchez was a suspect in the murder investigation of mortgage broker Ned Dillard in Corpse in a Garden (Case #2 of Grimsborough).

Maria is a 38-year-old maid of Latino origin. She has black hair tied to a bun at the back, and wears an adhesive bandage on her forehead. She also dons a black maid t-shirt which consists of black buttons and white trimming.

Maria was spoken to when the victim's card was discovered in the junkyard garden saying "Call Maria". She told Jones and the player that she used to work as a cleaning lady for Ned, but he had fired her a few days before his death. She then suggested speaking to Dennis Brown. 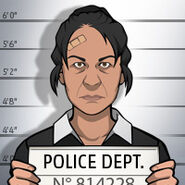 Retrieved from "https://criminalcasegame.fandom.com/wiki/Maria_Sanchez?oldid=529974"
Community content is available under CC-BY-SA unless otherwise noted.