Margot Kirkland was a suspect in the murder investigation of ballet choreographer Marta Ulanova in The Swan Song (Case #50 of Mysteries of the Past).

Margot is a 22-year-old prima ballerina. She has short black hair adorned with white feathers. She wears gold eyeshadow and lipstick. She dons a gold dress with white sleeves and a gold choker with a pendant. It is known that Margot drinks Dancing Queens, knows The Nutcracker and eats charcoal.

Margot became a suspect after Isaac and the player found her headpiece at the opera entrance. She said that she owed all of her success to the victim and that she had discovered her when she was the sugar plum fairy in Henri Monplaisir's production of The Nutcrakcer. She then said that her hard work would have been for nothing as the show would close due to the murder.

Margot was spoken to again about the commotion she made at the opera cafe, where she crashed into a waiter and began to eat multiple hamburgers. When Isaac tried to console her, she revealed that she was sad to know that the show had been shut down but was relieved that the victim was dead. She explained that the victim had pushed her too hard and that she was on the edge, constantly dreaming about the day when she could eat food like a normal person. She then excused herself and asked a waiter for a Dancing Queen cocktail.

Margot was found to be innocent after the team incarcerated Henri Monplaisir for Marta's murder. 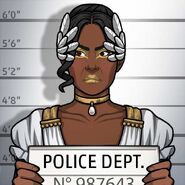 Retrieved from "https://criminalcasegame.fandom.com/wiki/Margot_Kirkland?oldid=415444"
Community content is available under CC-BY-SA unless otherwise noted.