Margaret Hatchman was the victim in Deadly Legacy (Case #36 of Pacific Bay).

Margaret was the forefront of motion female movie directors in Ivywood. She had green eyes and medium blonde hair. She was last seen wearing a striped white shirt underneath a beige vest adorned with a golden brooch and a camera badge. She also sported a gold necklace, a pair of silver earrings, and red lipstick, as well as holding a director's megaphone.

Amy and the player found Margaret tied down with a shackle in the set of Legacy and wounded as if eaten. They sent her body to Roxie, who deduced from Margaret's wounds that she was knocked out before being tied down to get eaten by a lion. Roxie also found distinct purple stains around the shackles, which she confirmed to have come from wine. As the victim had no alcohol in her system, this meant that the killer drank wine.

Following the autopsy, Russell informed Amy and the player that the lion had escaped into the symphony room. For the sake of protection, the team donned heavy armor before they succeeded in capturing the lion, which took Yann's forensic intervention to be registered as the murder weapon.

While Tamra Johnson initially hated Margaret for looking down on her job as a nail technician, she quickly turned around when Margaret told her about the stresses of being a director during one of her sessions and even invited her to the premiere in gratitude for listening to her. Margaret's work life prevented her from being at home frequently with her husband Phillip and their son. In the heat of an argument over this, Phillip asked her for a divorce although he did not really want it. Margaret promised Tobias Frankenberger a prominent role in Legacy to finish his acting career, but she changed the script so that he would get eaten by a lion in the first scene, angering him. Margaret had asked forefront music composer Hannah Simmer to compose the film score for Legacy, which she graciously accepted. However, Hannah found that Margaret meddled too much in her compositions. Margaret also frequently mistreated Brad Belinsky and his lion, so he gave the lion a chew toy resembling Margaret to vent his anger.

The killer turned out to be Tobias.

Tobias was enraged when it was revealed that Margaret made him the first to die in her movie, despite being promised a prominent role, so he lured her to the set, knocked her out with a shield, tied her up with shackles, and freed the lion, allowing it to maul Margaret to death. Judge Dante sentenced him to 20 years in jail. 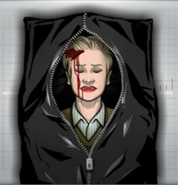 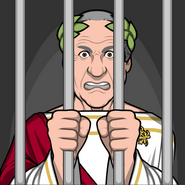 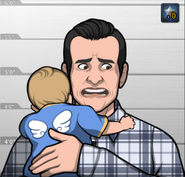 Phillip Hatchman, Margaret's husband.
Add a photo to this gallery

Retrieved from "https://criminalcasegame.fandom.com/wiki/Margaret_Hatchman?oldid=468283"
Community content is available under CC-BY-SA unless otherwise noted.