Marcus is Rita's 34-year-old now-ex boyfriend. He has black eyes, a shaved head and a goatee. Additionally, he is seen sporting a stud earring in his right ear and wearing a white shirt under a black jacket.

In his first appearance, he is seen holding a bouquet of flowers.

After arresting Brad Price's killer, Martine and the player helped Rita prepare for her date with Marcus. Before her date, Rita introduced Marcus to her two colleagues, before they left to go on their date.

After Rita said she wanted to break up with Marcus, Martine sent a text to Marcus to convince him that Rita was rejoining the army, and that she would be deployed to Timbuktu the following week. Marcus then went to the station to visit Rita. He told her that he respected her decision, even though he was disappointed that their relationship would end. He also said that he guessed she missed being in the army when she forced him to drop and give her twenty when he overcooked dinner once. He then said goodbye to her, telling her to stay safe. 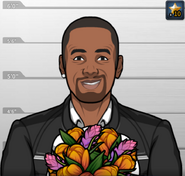 Marcus, as he appeared in Cross My Heart (Case #4 of The Conspiracy). 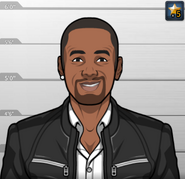 Marcus, as he appeared in Buzz Kill (Case #16 of The Conspiracy). 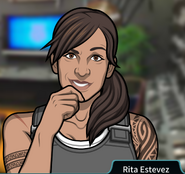 Retrieved from "https://criminalcasegame.fandom.com/wiki/Marcus_Cannon?oldid=474146"
Community content is available under CC-BY-SA unless otherwise noted.