Marcel Robin was a suspect in the murder investigation of editor-in-chief Annette Sommeur in Off with Their Heads (Case #2 of World Edition).

Marcel was first interrogated after the player and Carmen found a wig and glasses that were similar to the victim's. At first Marcel went on with his mime routine, but Carmen did not want to waste time and pushed him to speak. According to him, the victim went up to him and kicked him unprovoked. He only started to imitate her afterwards, saying that it was his way of dealing with bad things.

Marcel was interrogated again after traces of his makeup were found on the victim's torn up scarf. The victim had apparently returned to the gardens the night before sobbing and swearing. Marcel managed to overhear the victim saying she was tricked into paying lots of money for an old book that was not even complete. Then, in a fit, she tore up her scarf and ran off. Marcel then used the pieces to clean off his makeup.

Marcel was found to be innocent after the team incarcerated Constantin Perrier for Annette's murder. 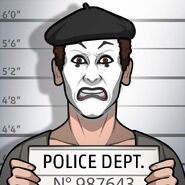 Marcel featuring in a "Caption the Scene" promo.
Add a photo to this gallery

Retrieved from "https://criminalcasegame.fandom.com/wiki/Marcel_Robin?oldid=408584"
Community content is available under CC-BY-SA unless otherwise noted.