Mama Yasmine (Arab: ماما ياسمين) was the killer of oil magnate Donald Barnes in Death in the Desert (Case #8 of World Edition).

Yasmine is a 53-year-old nomad of the Quadir tribe. She has gray hair which she puts into two braids and gold earrings. She wears a blue robe with hood and has a bone necklace. It is known that Yasmine rides camels, eats dates and drinks goat's milk.

Yasmine was first interrogated after the player and Carmen found a bottle of sand with a threat to the victim, and had Marina analyze it. Carmen pointed out how they spoke with Anir Aznag earlier assuming she was from the same tribe, much to Yasmine's distaste. Carmen apologized and asked about the bottle, to which Yasmine explained it was due to the refinery's false promise of a good life. The nomads were born with all they have being freedom, and she felt the refinery was taking it away. Carmen pointed out how the message was somewhat rude, causing Yasmine to walk out on them.

Yasmine was spoken to again regarding a postcard sent to her from her son in America. She thanked the player for finding it, saying it was precious to her. Carmen was surprised her son moved to America given how proud of their nomadic traditions Yasmine was, then Yasmine pointed out how many young men abandon the nomadic way of life. She also explained she met with the victim again to apologize for her behavior and asked him if he knew her son. However, Donald simply laughed and threw the postcard to the wind, pointing out how big of a place America is.

The team then found enough evidence to incriminate Yasmine for the murder. Yasmine admitted to the crime. She was against Donald's refinery and foreigners exploiting her land and destroying nomadic traditions. She was pushed to her limit when Donald implied that her son would never be glad to visit her back from the United States, which made her strangle him with a rope and push his body into a campfire to destroy evidence. Judge Adaku sentenced her to 20 years in jail. 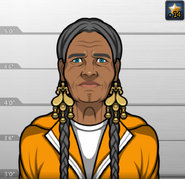 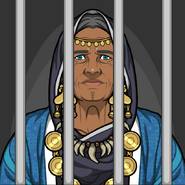 Yasmine, sentenced to 20 years in jail for the murder of Donald Barnes. 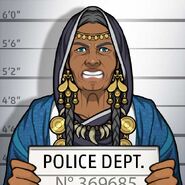 Retrieved from "https://criminalcasegame.fandom.com/wiki/Mama_Yasmine?oldid=474200"
Community content is available under CC-BY-SA unless otherwise noted.