Warden Mallory Banks was a suspect in the murder investigation of former CCN reporter Louis Leroux in Breaking News (Case #54 of The Conspiracy), prior to which she appeared as a quasi-suspect in Like a Pig to the Slaughter (Case #46 of The Conspiracy).

Mallory is a 44-year-old Grimsborough Prison's warden with short brown hair and blue eyes. She is seen wearing a white shirt and a black tie, which is adorned with a golden tie pin, underneath a deep blue prison warden uniform with eight golden stars on the shoulders and two front pockets. She also sports red lipstick and a beauty mark above her lips. It is known that Mallory knows chemistry, works out and uses Duck soap.

After arresting Sheriff Roy Loukas' killer, the player and Jones headed to Grimsborough Prison to speak with Mallory about Christian Bateman, who was a member of the original member Ad Astra with codename Orion and the killer of artist Meera Kat. However, after being asked about Christian, Mallory told the team that he was released a few days prior after some psychiatrists determined he was "under extreme psychological duress" when he killed Meera Kat and was thus not responsible for his actions, saying that he was no longer a threat. At the end of the conversation, however, Mallory explained that she had no idea about Christian's whereabouts.

Mallory became a suspect after she bumped into Gloria and the player at the scene of the murder. She told the team that the fire alarm had been triggered earlier that day, which must have been the killer's opportunity to set up the explosive in Louis' cell. She told the team that Louis had been a model prisoner, and had returned to his cell after taking a shower. This prompted Gloria and the player to investigate the prison bathroom.

Mallory was spoken to again about the electrical safety check in the victim's cell. She explained that she had forgotten about the check given the commotion with the fire alarm and told the team that she had carried out the check herself. When Gloria asked if she had noticed anything suspicious about the bulb, Mallory told the team that she would have noticed if someone had tampered with the bulb.

Mallory was found to be innocent after the team incarcerated Shweta Noorani for Louis' murder. After the trial, Mallory alerted the team to a prison break. Chief Parker and the player hastily arrived at the prison, where Mallory informed them that Ad Astra members Rozetta Pierre and Julia Brine had escaped with help from fellow Ad Astra members Christian Bateman and Joe Warren. During the escape, Mallory attempted to stop them, but was knocked out. Chief Parker then ordered Mallory to have her head injury checked out while the team planned their next move. 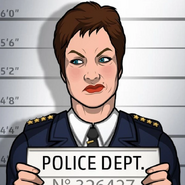 Retrieved from "https://criminalcasegame.fandom.com/wiki/Mallory_Banks?oldid=464055"
Community content is available under CC-BY-SA unless otherwise noted.