Madeleine Deville was a suspect in the murder investigations of local weatherman Clifford Grady in Cloudy with a Chance of Murder (Case #19 of Pacific Bay) and cabaret dancer Dinah Cooper in Hanging by a Thread (Case #24 of Pacific Bay).

Madeleine is a 30-year-old therapist of French heritage. She has green eyes and shoulder-length black hair with split ends at her shoulders. She also carries around a notebook and a blue pen with her at all times.

In her first appearance, Madeleine dons a green suit over a white shirt, and wears red lipstick and nail polish. In addition, she sports a pair of golden glasses with a chain attached to both sides of her glasses. It is known that Madeleine has a cat and knows French.

In her second appearance, Madeleine appears the same but is shown to wear a blue and orange face paint, and a carnival necklace which is blue, green and purple in color. It is discovered that she knows mechanics and eats candy apples.

Madeleine is a therapist whose primary area of service is Jazz Town.

Madeleine found herself in trouble when Amy and the player found an appointment card at JTS after the player matched Madeleine's face from the files of the police database. Madeleine praised the killer for offing Clifford but Amy told Madeleine that the police were dealing with a murder in the affair. Madeleine was unhappy about Clifford's negligence of Hurricane Yves but believed much of his trivial problems had to do something with cats, causing the weight of her first conversation with the police to lack depth.

Madeleine went over the line after the team found a sleeping pill prescription in which Yann was able to research the facts surrounding those sleeping pills. Yann was not happy when the prescription required Clifford to take 10 sleeping pills a day, prompting Amy and the player to have another discussion with Madeleine. Amy told Madeleine that the sleeping medications were banned from the market but Madeleine countered that the pills were safe to take. Amy and Madeleine commenced a heated exchange of words until Madeleine made clear that no one wanted Clifford in Jazz Town, and assured the team even though she wanted Clifford out of Jazz Town did not equate to her wanting to kill Clifford.

Madeleine was safe when the killer was impounded for grand homicide, but found herself in trouble for a third time when Russell caught her trespassing Agatha Christmas's property hours in the aftermath of the case's closure.

Madeleine was once again confronted by the Pacific Bay authorities during the player's investigation of the Toussaints in which the player and Frank found a flyer written by Madeleine called "Inside the mind of the Puppeteer". Madeleine admitted to the team of her interest in the mysterious serial killer known as "The Puppeteer"—who was currently wanted for the murder of Dinah Cooper—as they dodged the police in a three-decade window thanks to their intellect. Frank was turned off by Madeleine's admiration regarding Dinah's death, but Madeleine felt that the Puppeteer's return coincided perfectly with her planned book. Madeleine claimed that the Puppeteer was also a remarkable person in her watch, and wanted the police to wish her luck with her new book.

Moments after Russell took over Frank's place as the player's partner for the remainder of the investigation (due to Chief Marquez harboring strong beliefs of psychological expertise requirements to catch intelligent criminals), the player found a prescription bottle which required Hannah's input. Hannah found out that the bottle seen in the Carnival storage room was prescribed to Dinah from Madeleine for some reason, which warranted Russell and the player to talk to Madeleine about this sordid prescription.

Russell chastised Madeleine for not disclosing the fact she was Dinah's therapist, but Madeleine chose to go off-subject a little bit which forced Russell to assume Madeleine praising about the Puppeteer with affection. Since Madeleine is very good in keeping secrets, Russell had one solution—pretend that he would buy candy apples (per Roxie, the Puppeteer consumed candy apples) to persuade Madeleine to disclose a lead—that the Puppeteer had a beautiful mind.

With Russell's help, the player managed to close the chapter of terror in Jazz Town, but not without proving Madeleine innocent. 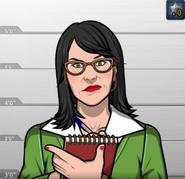 Madeleine, as she appeared in Cloudy with a Chance of Murder (Case #19 of Pacific Bay). 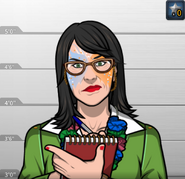 Madeleine, as she appeared in Hanging by a Thread (Case #24 of Pacific Bay). 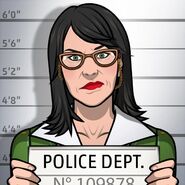 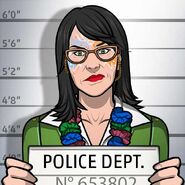 Retrieved from "https://criminalcasegame.fandom.com/wiki/Madeleine_Deville?oldid=494974"
Community content is available under CC-BY-SA unless otherwise noted.