Mad World is a case featured in Criminal Case as the ninth case of Supernatural Investigations (Season 7) and the three-hundred thirty-first case overall. It takes place in the Southwest.

Gwen and the player disguised themselves as nighttime inspectors to enter the Blackmoor Asylum in El Paso, only to find Dr Lucrezia Stein with her skull cracked open in a bathtub.

Mid-investigation, the victim's assistant, Adam Enstrom, informed the team that one of the patients, former police cop Greg Schmidt, had escaped, prompting the team to return Greg to the asylum. Later, Felix panicked after having a creepy mask stuck on his face. The team then found enough evidence to arrest Adam for the murder.

Adam admitted that he was Lucrezia's creation, having been made from stitched up body parts of her previous patients, brought to life, and then mentored by Lucrezia until he was fit to be her assistant. Noting his creator's lack of empathy for her patients, he sedated her and commenced the trepanning process to cure her, accidentally killing her.

Post-arrest, Charity and Mercy, the twins conjoined by the victim, told the team that they had found Adam dead in the asylum dorm. Ben and the player found him dead from a self-inflicted drug overdose with a suicide note on his body. The team then arranged a burial and funeral for Adam, only to be caught by Agent George Mathison, who thought that the team was hiding evidence of their latest crimes in the asylum. Lucrezia's abused daughter, Savannah Austin, vouched for the team and showed George evidence that her mother was the criminal and that the asylum needed to be shut down.

Meanwhile, Gwen and the player talked to Greg about the tarot murders he was investigating prior to his internment in the asylum. Schmidt said that he had kept his findings in a secret file he had uploaded online. After the team found the password, Hope discovered Schmidt's findings: five years prior, a girl named Abigail Riley had died of suffocation while staying with her six friends in Amarillo, Texas. While her death was ruled an accident, Greg suspected foul play. When the three tarot murders transpired afterwards, the three culprits were found to be three friends of Riley present when she died. Hope then said that Jesse Adams, Justine Bankston, and R.J. Fielding were the other three.

The team then talked to Greg once again. After revealing their identities as supernatural investigators and divulging their findings, the team was told by Greg that Riley's death was a result of an occult ritual gone wrong. The team then found a defibrillator for Hope to kickstart her drone so she could track down Fielding before he would be possessed by Riley's ghost to commit another murder.

After all the events, the team learned that George had closed down the asylum and relocated the patients to the Morningside Psychiatric Hospital. Hope was then able to track down Fielding's car parked outside a house near Devilman's Bridge, the bridge close to the house where Riley had died. The team then rushed to the bridge before Fielding could be possessed.

Willie Hicks
Add a photo to this gallery

George Mathison
Add a photo to this gallery 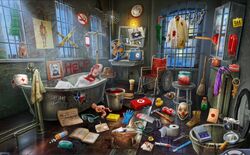 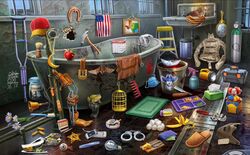 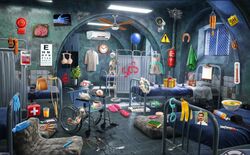 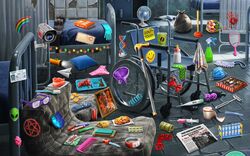 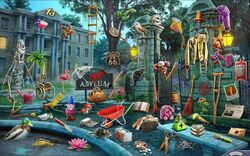 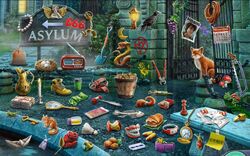 Front Gate
Add a photo to this gallery

Something Wicked This Way Comes (4/5)

Retrieved from "https://criminalcasegame.fandom.com/wiki/Mad_World?oldid=528001"
Community content is available under CC-BY-SA unless otherwise noted.