Janaína is a 36-year-old priestess. She has long curly black hair under a white headdress adorned with shells. She dons a white blouse and scarf with several blue and brown necklaces around her neck, and matching earrings and bracelets on her right arm. It is known that Janaína is superstitious.

Janaína became a suspect after the player and Michelle found her hair mixed with the victim's in a bowl. She said the victim had approached her for a prediction on his outcome for the race, so she had taken some of his hair for the ritual. Unfortunately, she had seen death in his future, and Oscar had not taken that very well, becoming very angry and leaving for the stadium.

Janaína was spoken to again about a broken statue found at the favela bar. She thanked the player for finding the statue, saying that the victim had broken it. When asked what it was, she said the statue was a sacred Zé Pilintra statue, who's the patron spirit of barrooms and gamblers, a good luck charm of sorts. But when the victim had broken it, she had trouble winning again, knowing the victim was not happy for the prediction she had made for him.

In the end, Janaína was found to be innocent after the team incarcerated Edson Caetano for Oscar's murder. But she was spoken to again about her fingerprints found on a bag of ayahuasca, which had been given to Edson to kill Oscar. She said she had put in that locked box they found it in, mostly because it could be dangerous in the wrong hands. She had witnessed some men giving it to Edson, but was unable to recognize them. Luckily, she had noticed those same men approach other athletes at the stadium, prompting the player and Michelle to search there for more clues. 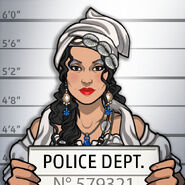 Retrieved from "https://criminalcasegame.fandom.com/wiki/M%C3%A3e_Jana%C3%ADna_de_Iemanj%C3%A1?oldid=408685"
Community content is available under CC-BY-SA unless otherwise noted.