View source
watch 02:56
Raise a Floppa - The Loop
Do you like this video?
Play Sound

Lynn was a knife-thrower at the Wonderland Carnival. She had purple eye contacts and long black hair. At the time of her death, her hair was adorned with white flowers and a red ribbon and she sported purple eyeshadow and ruby lipstick. She donned a white and red blouse lined with red ruffles, a black bodice, a red skirt and black high heels. She also wore a black necklace with red jewels.

Lynn was found tied up to a target and stabbed to death with her own knives. However, Dick reported that Lynn had died due to being stabbed in the stomach and that the other knives were plunged into her body post-mortem. The coroner also found traces of popcorn on the handle of the murder weapon, meaning the killer ate popcorn.

Hope Woodford had gone to the carnival, looking for her sister, Faith. When she showed a picture of Faith to Lynn, she recognized her but soon feigned ignorance, ripping up the picture in the process, angering Hope. Lynn fell in love with the bearded lady, Mysteria, but she made clear that she did not reciprocate the feeling. Conversely, Twinkles the Clown fell in love with Lynn, but she barely even noticed him, breaking his heart. Lynn feigned interest in Harold Coppersmith's illusions to get closer to him in order to steal Harold's book containing the secrets to his tricks. Lynn then blackmailed him with the book, but he refused to give in. Lynn's assistant, Delores Bower, thought she had superior knife-throwing skills and so was angry at Lynn for keeping her as just the assistant.

The killer turned out to be Wonderland Carnival's bearded lady, Mysteria.

Upon admitting to the murder, Mysteria revealed her true identity as Faith Woodford. She said that she went to the carnival and disguised as a bearded lady after escaping the asylum to blend in. However, when Lynn fell in love with her, she dug up her past and told her about it. Not wanting her identity revealed for fear of being sent back to the asylum, she stabbed Lynn in the stomach and staged the murder to avoid incrimination. In court, Judge Lawson sentenced Faith to psychiatric incarceration, much to her sorrow. However, Lawson later changed Faith's sentence to 20 years in prison after it was discovered Faith was not insane at all. 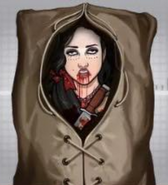 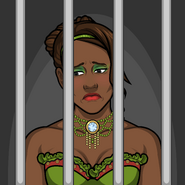