Lyla Heller was the killer of journalist Todd Anderson in Don't Die over Spilled Milk (Case #17 of Supernatural Investigations).

Lyla is a 32-year old PhD student. She has green eyes and short messy blonde hair. She sports black cat-eye glasses and pink lipstick. She wears a loose purple blouse with the collar undone that exposes a blue bra strap. She sports a gold triangle-shaped necklace, golden pearl earrings and a loose golden bracelet around her left forearm. In addition, she carries a clipboard in her right arm. It is known that Lyla is strong, eats government cheese and listens to Kismet the Rapper.

Lyla became a suspect after Gwen and the player discovered that the victim had had a lot of missed calls from her. She told the team that she was writing her PhD these on urban legends and had consulted with Todd because he had written many articles focused on Bellevue Towers. She also mentioned that she had visited the victim at his apartment.

Lyla was spoken to again about her glasses at the crime scene. She revealed that she had gone to speak with Todd in person after he avoided her phone calls about him pulling her research on The Milkman from the Chicago Register. She explained that her PhD thesis was the most important thing in her life and that Todd's actions had ground her work to a halt.

In the end, it was proven that Lyla was Todd's killer. She said that she killed Todd as he was going to kill the legend of The Milkman for good. She said that the residents of Bellevue needed the legend to be true as it took the blame for many of their misfortunes (including the death of her mother when she was seven). The team then turned her over to the police. 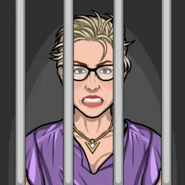 Lyla, turned over to the police for the murder of Todd Anderson.
Add a photo to this gallery

Retrieved from "https://criminalcasegame.fandom.com/wiki/Lyla_Heller?oldid=524469"
Community content is available under CC-BY-SA unless otherwise noted.