Lupita Mendez was a suspect in the murder investigation of project coordinator Cindy Hamilton in Day of the Dead (Case #49 of World Edition).

Lupita is the 35-year-old organizer for the Day of the Dead parade. She has curly brown hair with red and pink roses, and has her face painted like a skull. She dons a black dress with skeleton motifs, red and pink roses along her shoulders, and an opal pendant. It is known that Lupita drinks tequila and rides a motorcycle.

Lupita became a suspect after the player and Jack found the mask she gave to the victim on the crime scene. She confirmed inviting Cindy to the parade, deciding to extend an olive branch despite her being unpopular. When informed of her murder, she was surprised saying its one thing to dislike someone, and something else entirely to kill them. Though Lupita said that not many people liked the victim, she could not think of anyone willing to go far enough to kill her.

Lupita was interrogated again about a photo showing that she was mad at the victim. She explained that the victim sat on memorial altar, drank the offering water, and lit a cigarette using one of the memorial candles, all of which made her mad. Even though she went to bury the hatchet, the victim simply laughed at her. When Jack pointed out that she was at the crime scene where Cindy was murdered, Lupita said she had nothing to do with her death.

Lupita was found to be innocent after the team incarcerated Madena Cuervo for Cindy's murder. 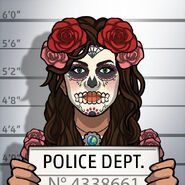 Retrieved from "https://criminalcasegame.fandom.com/wiki/Lupita_Mendez?oldid=450404"
Community content is available under CC-BY-SA unless otherwise noted.