Luna is a 34-year-old blonde-haired, green-eyed witch with a leaf peace headband. She wears an earth green robe with a terracotta corset and an earth brown undershirt underneath the robe respectively. She styles part of her hair in a small braid to her left, tied with a green hairband. For accessories, she wears two black bead necklaces, a pentagram necklace, and a healing crystal. She also has scratch marks on her right cheek. It is known that Luna knows witchcraft and owns a black cat.

Luna was a modern-day witchcraft practitioner of Grimsborough.

The moment Rebecca Moire took a picture of the crime scene, Jones and the player did not hesitate to interrogate her and confiscate Rebecca's memory card as evidence for a murder. After Alex's analysis, Rebecca was determined to have taken pictures of Luna Hecate, prompting the team to bring Luna into the investigation.

The team wanted to inquire about Luna being a fan of Tess Goodwin, and told the team that Tess's serial killing methods brought a lot of pain and misery to Grimsborough, feeling that Tess wanted to disrupt the circle of life.

When the team took a look at Mary Goodwin's notes--the team found out that a pilgrim woman known as Theodora Hecate knew the identity of the Crimson Order's leader. Jones was shocked that the leader was the one who was liable for much of the Crimson Order's deceit, and deducing Theodora to be Luna's ancestor, did not hesitate to speak to Luna at the dark forest. The team demanded Luna to discuss about the knowledge passed from Theodora to her descendants but Luna claimed that Theodora was too good in keeping secrets, even claiming she was disowned by the Hecates after being caught practicing witchcraft in present-day Grimsborough. Luna told the team she did not want to take a chance because the people who wanted to know the leader of the Crimson Order turned out to be dead, and felt that her black cat was the emotional sustenance she desired.

The team gathered enough evidence to incriminate Luna as the one liable for Tess's murder. The team called Luna to the interrogation room to arrest her. Moments before she was shipped to court, Luna found out that Tess spent hours in the detention center's library trying to study how her ancestor Mary Goodwin died and could not afford to let Tess get away with it. Luna mailed a pendulum to Tess's detention cell so Tess could hypnotize the guards and escape. Luna's plan went well as she was able to corner Tess in the Nautical Museum (which looks like a pilgrim ship in the past). Luna tied Tess the same way Mary was tied up and then killed Tess the same way Mary was murdered in 1649. Luna admitted that she was a member of the Crimson Order, but she refused to out the name of the leader as her family had been Crimson Order members for generations, alas the Hecates were very good in keeping secrets.

In court, Luna stated that she did the city a favor but the Judge countered that Tess's guilt did not warrant a murder, which were grounds for a 25-year jail sentence for Luna. 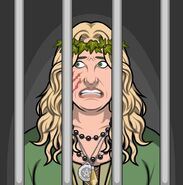 Luna, sentenced to 25 years in jail for the murder of Tess Goodwin. 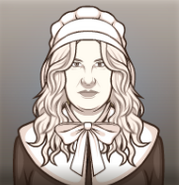 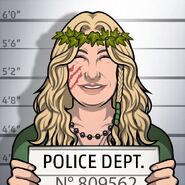 Retrieved from "https://criminalcasegame.fandom.com/wiki/Luna_Hecate?oldid=502527"
Community content is available under CC-BY-SA unless otherwise noted.