Luke is a 35-year-old film professor with a short black afro on top of his light brown glasses. He has brown eyes and a short black goatee and some wrinkles around his eyes.

In his first suspect appearance, Luke is 30 years old and is seen wearing a white polo shirt with the top button undone under a navy blue jacket. In the right hand pocket, he carries a white pen with a red tip. He also carries a rucksack around his left shoulder. It is known that Luke uses Friendnet, drinks coffee and watched The Hangman Murders.

In his second suspect appearance, Luke ditches his navy blue jacket and wears a blue checkered blazer with a pocket on the left side, which has a pen and a pencil inside. It is discovered that he eats chili, is a scuba diver and has hay fever.

The Ghost of Grimsborough

Luke first appeared with Grace in Desmond Galloway's Antique Shop when he wanted Jones and the player's help to find and put together an oil lamp which he had accidentally broken. The team eventually found the oil lamp and repaired it in a matter of no time, and then gave it back to Desmond, much to Luke and Grace's delight.

Luke re-appeared when Lisa Edwards was found hung up from a noose in the library of Grimsborough University where he worked as the Cinema History teacher. Grace told the team that Luke had come to meet them in the station to talk to them about the murder.

They then went to the interrogation room where Luke told the team that he knew Lisa personally and that she attended one of his classes, Movie History 101. He further said that the victim was very shy and withdrawn, but he was convinced that it was a murder, and not a suicide.

The team did not believe him as Lisa's autopsy did not show any result of foulplay. Luke then explained them that he taught a class about Movie History and that the last movie they studied was The Hangman Murders. It was about a murderer who disguised his crime to make it look like his victim hanged herself, the same thing that had happened to Lisa. Luke then gave the team a clue: he told the team that, in the movie, the murder had also taken place in a library and that the criminal had written the victim's suicide note and kept it in the bottom row of a bookshelf.

The team listened to Luke and decided to give it a try. They went to the search the library's bookshelves and really found a faded letter in the bottom row of one of the bookshelves. They used powder to reveal the writing. It was a suicide note written by Lisa in which she claimed that the world would be better without her. The team then handed the note to Alex for the analysis. The analysis result proved that Luke was right as Alex confirmed the team that the note was actually written by the killer, and not the victim.

Luke was spoken to for the last time about the harsh remarks he had made on an essay written by Lisa. Lisa had obviously taken his remarks to heart as the team had found it torn to pieces in the platform of the Onion Street subway station. When asked about this, Luke told the team that he had no intentions of being harsh with the victim and that he was not aware of it. He then explained to the team that he always tried to be friends and behave nicely with his students but it never worked for some reason.

Luke appeared again when he made a cameo appearance soon after the team found a faded paper which read, "To-do list for Grace's birthday surprise". Luke then arrived and told the team that he had made the list since Grace's birthday was coming up, and he was afraid of messing it up again. They spoke for some time and the conversation ended when the team realized that they had to go back and continue their murder investigation.

Five years had passed and the player met Luke again after they and Gloria found the victim's high-ranked essay written for his Film 301 class. After a short reunion, Luke said that Cindy deserved the high rank as her essay was extremely genius. Later, when being informed of Cindy's murder, Luke was in shock. He then told the team that Cindy and other students were shooting their horror film on the island in the university lake, prompting them to get out to the island for more clues.

Luke was spoken to again after the team (per Gabriel) found out that Cindy had cast a love spell on him. When being asked about this, Luke told the team that he knew Cindy had a crush on him, but he did not know that she had gone that far. Luke then explained that Cindy kept hitting on him by asking him to teach her scuba diving or bringing special teas to help with his hayfever. In the end of the conversation, Luke told the team that he would never date a student as it was against his principles.

The team then managed to discover that Luke was innocent for Cindy's murder as they incarcerated student Toby Hansen for the murder. Later, Luke came to the station and asked the player for help. He explained that although Toby was incarcerated and Cindy was killed, the film should be completed so that the students' effort into the film was not wasted. Martine and the player then agreed to help him and headed to the movie set on the island in order to find the hard drive with all the footage of the film. 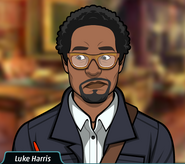 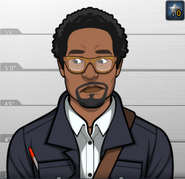 Luke, as he appeared in At the End of the Rope (Case #35 of Grimsborough). 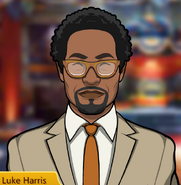 Luke, as he appeared in The Rorschach Reaper (Case #41 of Grimsborough). 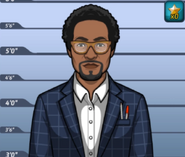 Luke, as he appeared in Final Cut (Case #37 of The Conspiracy). 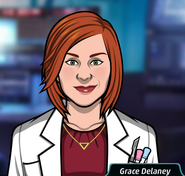 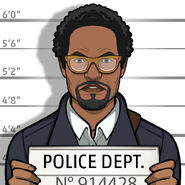 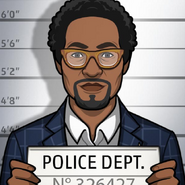 Retrieved from "https://criminalcasegame.fandom.com/wiki/Luke_Harris?oldid=520101"
Community content is available under CC-BY-SA unless otherwise noted.