The Murder of Edward Blake (s7)

Luke Fernandez is a main character appearing in Season 7 of Criminal Case, where he serves as a partner to the player throughout the season as the Hunting Partner of Supernatural Hunters.

20 years of age, Luke has green eyes, short, wavy brown hair, a mole beneath his left eye, and a mole by the right side of his jawline. He wears a dark mauve shirt emblazoned with a gold skull and three stylized gold roses under a black leather jacket with silver buttons. He also wears blue jeans and sports a silver necklace tucked behind his shirt.

Initially living in New Mexico with his family until he was seven, Luke grew up in foster care and witnessed a ghost attack which inspired him to become a supernatural hunter. He is hot-headed but eager to learn, and he hates being underestimated. He likes shooting pool and is interested in fast cars and paranormal TV shows. It is known that Luke shares an RV with Felix and plays Criminal Chase.

In his quasi-suspect appearance in The Ghost of Murders Past, Luke was possessed by the ghost of Abigail Riley, making his body glow blue as well as his eyes and hair turn gray and white, respectively.

In his quasi-suspect appearance in A One-Wolf Open Slay, Luke sports an elf outfit consisting of a green shirt with a spiky red collar and a matching hat with a white pompom. He also sports white sleeves with red stripes.

During the team's attempt to arrest artist Axel Bross for the murder of oil tycoon R.J. Fielding, the spirit of Abigail Riley appeared and possessed Luke's body, taking both Luke and Axel with her. After tracking down the runaways, Felix performed an exorcism on Luke, driving out Riley's spirit and freeing Luke.

After arresting Ruth Wu's killer, Gwen, Hope and the player joined Luke and the rest of the team at their Christmas party after Gwen gifted Hope with a guinea pig. Luke, dressed in an elf outfit, welcomed Scrooge the guinea pig to the team. After Chief Arrow joined the team sporting reindeer antlers, the team's Christmas party commenced.

Mid-investigation, Felix informed Chief Arrow and the player that Luke, skeptical that it would work, had drunk witch Morgana Blackhawk's love potion. However, the potion had worked, which meant that Luke would fall madly in love with the first person he laid his eyes on. After running off to the roller rink, Luke fell in love with vampire Fabien de la Mort.

After arresting Sharon Decker's killer, Felix and the player asked shop owner Ace Boome (aka Cupid) for help in breaking Luke's love potion spell. Ace told the team that his Love Potion Number Zero would nullify the effects of the potion. Felix and the player found the potion in his shop and sent it to Priya for analysis.

After Priya revealed that the concoction was essentially salad dressing, Felix and the player returned it to Ace and went to confront Luke. Ace fired an arrow dipped in the potion at Luke, nullifying the effects of the potion. He asked the team why he was touching Fabien, irritating the vampire.

Occasionally, Luke is tasked to act as a proxy for experts the team meet while on the field when expertise cannot be gathered from inside the laboratory. He then informs the team of such results after a certain amount of time or a speed-up process using Criminal Case Cash. His task-wait rates vary depending on the difficulty of the task, but they all cost 1 Criminal Case Cash per 30 minutes.

Below is the list of analyses Luke acts as a proxy throughout the course of the game:

The player may choose Luke to join the investigation of each crime scene (in any Supernatural Investigations cases where he teams up with the player) and provide hint bonuses. He is available as a 1-hint partner. 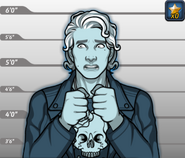 Luke, as he appeared in The Ghost of Murders Past (Case #10 of Supernatural Investigations). 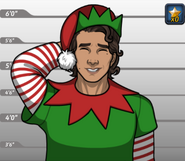 Luke, as he appeared in A One-Wolf Open Slay (Case #11 of Supernatural Investigations).

Luke, as he appeared with Fabien de la Mort in Over the Edge (Case #18 of Supernatural Investigations). 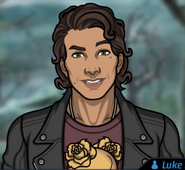 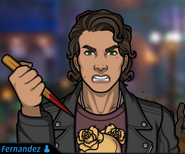 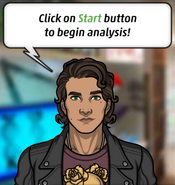 The player may choose Luke to join the investigation of each crime scene (in any Supernatural Investigations case he teams up with the player) and provide hint bonuses.

Luke and Gwen will validate the player's final score once a scene is solved. 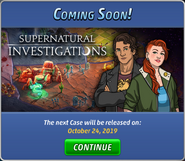 Luke, along with Gwen, in a "Coming Soon" in-game popup for the next case of Supernatural Investigations. 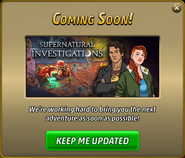 Luke, along with Gwen, in a "Coming Soon" in-game popup as more cases for Supernatural Investigations are added.

Retrieved from "https://criminalcasegame.fandom.com/wiki/Luke_Fernandez?oldid=545667"
Community content is available under CC-BY-SA unless otherwise noted.