Lucy Armstrong was a suspect in the murder investigation of science-fiction actor Rex Logan in Star Crime (Case #35 of Pacific Bay).

Lucy is a 22-year-old costume designer. She has green eyes and wavy auburn hair that lays onto her right shoulder. Wearing red lipstick, she dons a black apron fitted with paintbrushes, and is seen painting an arm for a costume at times. Additionally, she wears a blue-purple scarf, and she also wears the badge of an infamous cult on the left side of her apron. Other than that, she has traces of blue makeup on her face due to the nature of her job as a prop designer. It is known that Lucy uses talcum powder.

Lucy was suspected of murder once Amy and the player found an acid bottle order form confirmed by Hannah Choi that Lucy did purchase the acid bottle as a part of the production of Warzone Pacific. This made Amy suspect Lucy might have done the murder, so the player started interrogating Lucy about it.

The player found and restored a prop Lucy broke with a threatening message from Rex, forcing Amy and the player to talk to Lucy for a second time. Lucy confirmed that Rex was going to have Lucy out of production, and the key reason was because Lucy did not make props that would make actors look great in a film set. Lucy confirmed that Rex used his Utopian faith to kick her out of the movie industry, but with Rex dead, Lucy's job is secure.

Lucy was found innocent after the murder was found to have been committed by Rex's co-star, Daniel Lambert, but she was under fire for being involved in a brainwashing fiasco which involves using the Ivywood Movie Awards for a grand plot the Utopians have in the making. 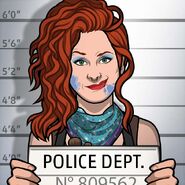 Retrieved from "https://criminalcasegame.fandom.com/wiki/Lucy_Armstrong?oldid=409209"
Community content is available under CC-BY-SA unless otherwise noted.