Louise is the mother of the late Gladys Perrin. She has chin length wavy gray hair. She is seen wearing a white-collared beige blouse under a white apron. It is known that she takes insomnia elixirs.

An insomnia elixir was found which (per Evie) was purchased by the victim for Louise, Gladys' mother. Gladys said that after her mother had gotten sick, she did what she had to do and went back to being a prostitute. The victim was kind enough to purchase medication for her as a payment for Gladys instead of having Madam Xiang get her cut of the earnings. 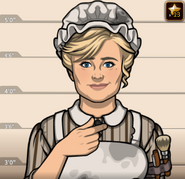 Retrieved from "https://criminalcasegame.fandom.com/wiki/Louise_Perrin?oldid=478933"
Community content is available under CC-BY-SA unless otherwise noted.