Louis Scripps was the killer of archaeologist Burt Montana in Temple of Doom (Case #40 of Pacific Bay).

Louis is a 21-year-old now-former junior archaeologist with green eyes who suffers from sunburns due to wanton exposure underneath Rhine Canyon's ultraviolet sunlight. He is seen wearing a pair of glasses and a beige shirt with two front pockets, and he has ginger hair and green eyes. It is known that Louis eats red chili peppers and knows Aztec and astronomy.

Louis was flagged as a murder suspect after he was caught by Amy and the player disturbing their conversation about the crime scene where Burt was murdered. All Louis heard were screams, but Amy told Louis that the player needed to interview him in an instant.

All Louis remembered about Burt was that he saved his life a lot of times, even sharing a couple of adventures with him. Amy wanted to know what Louis heard on the crime scene, but he had to hide given that they were abnormal screams. Amy wanted to know whether or not Burt and Louis were looking for a lost Aztec temple in Rhine Canyon—to which Louis stated that Burt knew of an Aztec statue in the lost temple which is said to be a long-lost treasure.

Louis would be due for a second conversation after Amy and the player found a camcorder in the Aztec Temple in which the purpose of the message was to greet his alien friends to Earth, and to meet with him upon their arrival. Amy did not understand why would Louis do such a thing, so the player and Amy rushed to Louis for another discussion.

Amy told Louis that he lied to the team about him not knowing where the Aztec Temple was, and to explain about his message to the aliens recorded on his camcorder. Louis was mad because the team took his camcorder as evidence for a murder investigation, but Amy thought Louis was totally losing it. Louis started his lopsided confession stating that aliens existed a long time ago and believed that he would be the first person to meet an alien given that aliens built Aztec temples long ago. Louis became Burt's assistant and upon discovery of the Aztec Temple in Rhine Canyon, he left his camcorder (with his message to the aliens) in the altar of the temple. Amy felt that Louis totally lost it, so she and the player resumed their murder investigation until evidence pointed Louis as the killer.

Louis had no clue as to why Amy and the player would arrest him, but when Amy informed Louis about the evidence the player gathered to incriminate Louis, he bowed to the player's investigative skills since no one believed his theory about aliens, especially Burt. Louis believed that he descended from a race of aliens from outer space but Amy felt this was out of line when Louis took a bow. He told Amy and the player that he matched the description of an ancient alien race a few years before he was arrested for murder. Louis felt lonely because given that he was the only alien on Earth, he had to teach himself Aztec to communicate with the aliens, so to make it happen, Louis assisted Burt in finding the statue, and knowing the statue need a sacrifice to become active, punctured Burt to death, tied him to the ruins, pulled his heart out, and placed needles on Burt's heart so that the Aztec statue would talk. Louis also had to leave a camcorder with his message to the aliens so that he would allow more aliens to come to Earth as a part of his benign plan, but Amy had enough of Louis, so the player shipped him to Judge Dante to face trial.

Judge Dante felt that he had no power over intergalactic matters in which Louis felt honored since he was not of the planet, until Judge Dante spotted Louis's delusional condition on the court files. Although Judge Dante cannot judge aliens based on the judicial authority he is entitled to, he was able to indict Louis for the sacrificial murder of Burt Montana, so a 30-year jail sentence was issued to Louis. Louis did not like Judge Dante's decision, but the court's decision was made final. 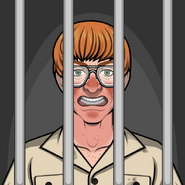 Louis, sentenced to 30 years in jail for the murder of Burt Montana. 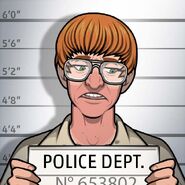 Retrieved from "https://criminalcasegame.fandom.com/wiki/Louis_Scripps?oldid=434621"
Community content is available under CC-BY-SA unless otherwise noted.