Louie Cooper is a minor character in Criminal Case, appearing during the events of After the Storm (Case #18 of Pacific Bay) and Hanging by a Thread (Case #24 of Pacific Bay).

Born on 8 July 2000 in Jazz Town, Louie Cooper—a juvenile of 14 years of age—is the son of the late Dinah Cooper, a now-deceased cabaret dancer who worked in a jazz club called The Jazz Joint, and the grandson of Blake Cooper. He sports a short cornrow hairstyle and dark brown eyes. Besides that, he dons a yellow-and-green T-shirt underneath a green hoodie, and carries a black backpack on his shoulders. It is known that Louie has asthma.

Hours after Elmer Buttons's murder investigation was successfully solved, Dinah phoned Amy requesting help from her and the player. Since Amy had to file a wanton amount of reports, Yann told Amy he would come with the player instead, giving Amy time to finish up filing those reports.

Dinah asked the player to help her find a cabaret outfit hidden by her son Louie in a place where no one could access it, putting Dinah at risk for termination if she did not get her outfit in time. Although Yann and the player found Dinah's cabaret dress, the player had to go through the trouble of piecing it back together. The player's actions infuriated Louie because of his beliefs of Dinah being at work more than at home night after night, prompting Yann to admit to a fatherless Louie that he had to live his life as an orphan since he was 14 years of age.

In spite of Louie's stubbornness, the player saved Dinah's job she depended on to survive, although Yann told her that parenthood is no easy task and advised Louie to go easy on Dinah since the player took Dinah's job requirement to support Louie for granted.

During the murder investigation of kleptomaniac Theo Mercier, Louie was mentioned when Dinah had to cooperate with the police once again after Amy and the player found a money bundle Dinah intended to issue to Theo in their second visit to the Town Square Pharmacy. Dinah admitted that she gave Theo the money, but needed her life's savings to alleviate Louie's asthma, knowing prescriptions were out-of-reach. Dinah wanted Theo to give her the asthma medicine he stole from Town Square Pharmacy, but she was mad that she had to pay Theo up-front. In spite of Dinah having to work extra shifts in the Jazz Joint, prescriptions were still out-of-reach for her. Dinah's conversation broke Amy's heart as Theo apparently required payment from Dinah in exchange for quality asthma medication for Louie.

In a shocking turn of events, Louie's mother, Dinah, was chosen as one of the victims of the notorious serial killer known as "The Puppeteer"—who returned to killing after over a decade.

Although Louie did not appear during the murder investigation, he was the main topic during Blake's conversations with the police. Blake did not like the resolution of Dinah being overly protective and overly controlling of Louie, which prevented Blake from seeing Louie, and he even had to write a message to Dinah questioning her shielding of Louie from him on purpose, making Blake uncomfortable. Besides that, Blake did not like the fact that he was not allowed to take Louie out for a candy apple or so.

Louie was also briefly mentioned during Stanley Bullock's first conversation with Frank and the player, as Stanley mentioned to the team he strived to raise Louie as a good neighbor.

Louie became a central topic in Freddie's second conversation with Frank and the player after a book called "The Adventurous Puppet" addressed to Louie from Freddie was found in a luxury steamboat called The Abigail. Freddie told the team he regretted his decision to give Louie that book and claimed to get along with kids like it was second nature. Dinah and Louie got into arguments, suggesting Freddie feeling miserable about Louie, so Freddie gave Louie a chance to learn how to make preparations for the Carnival by teaching Dinah's son mechanics. Freddie felt that carnivals were important to cheer juveniles up in times of their difficult moments.

The player closed the chapter of terror plaguing Jazz Town thanks to the psychological expertise of Dr. Russell Crane. Hours following the historical arrest, Amy and the player found Louie's birth certificate in The Abigail as everything Blake needed to secure custody of Louie. Besides that, the player was kind enough to find a flyer of Dinah's performance as a reminder on how much work Dinah had to put to raise Louie. 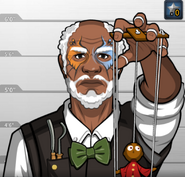 Retrieved from "https://criminalcasegame.fandom.com/wiki/Louie_Cooper?oldid=408573"
Community content is available under CC-BY-SA unless otherwise noted.