Lorenzo Sims was a suspect in the murder investigation of his foster brother, Deputy Sheriff Gus McGuff, in Fields of Murder (Case #43 of The Conspiracy) and the killer of Sheriff Roy Loukas in Like a Pig to the Slaughter (Case #46 of The Conspiracy).

Lorenzo is a 43-year-old drifter. He has short brown dreadlocks and a five o'clock shadow. He wears a black vest under a torn red shirt and a faded blue ripped denim jacket. Additionally, he sports a small silver hoop earring in his left ear.

In his first appearance, his clothes are stained with soot.

In his second appearance, his clothes are clean. Additionally, his red shirt is untorn. It is known that Lorenzo eats bacon, reads Animal Farm, uses a mud mask and drinks Gold Stag whiskey.

Lorenzo became a suspect after Gloria and the player found a torn photo of him in his backpack in the tractor barn. Lorenzo thanked the team and told them that he was a drifter going wherever the wind blew when asked about his business in Spring Fields. He denied knowing anything about the murder and was told to stay in the district until the investigation was over.

Later, the team spoke to Lorenzo after they found the other half of the photo that they had discovered earlier. The other half had the victim in it, meaning that Lorenzo had known Gus. When asked about the photo, he said that he had torn it in half, explaining that he and Gus had been like brothers in their teenage years as they were raised in the same foster home. However, when Lorenzo turned up in town and asked Gus for a loan, he was turned away and treated like a piece of trash.

Lorenzo was found to be innocent after the team incarcerated Cody Mays for Gus' murder.

Lorenzo became a suspect again after Jones and the player learned that he was at the victim's house. He explained that the Sheriff had taken him in after his foster brother was killed, and had been helping him get his life together. Jones then told him that the Sheriff had been murdered. Lorenzo then told the team that he thought Roy had gone on a night shift.

Lorenzo was spoken to again about him stealing the victim's flask. He confessed that the victim had lectured him about his drinking. While he had initially enjoyed living with the victim, the two had often argued and Roy had kicked him out of his house.

In the end, it was proven that Lorenzo was Roy's killer. Upon admitting to the murder, Lorenzo said that the Sheriff had him taken into foster care after having to break up a violent fight between his parents. Angry at the Sheriff for ruining his life by separating him from his family, Lorenzo lured him into the pigsty, slashed his throat, cut him into pieces, and left the pieces in the pig trough as pig feed. Judge Powell sentenced him to life in prison. 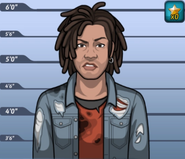 Lorenzo, as he appeared in Fields of Murder (Case #43 of The Conspiracy). 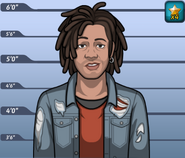 Lorenzo, as he appeared in Like a Pig to the Slaughter (Case #46 of The Conspiracy). 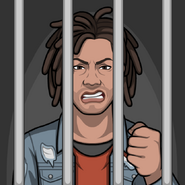 Lorenzo, sentenced to life in prison for the murder of Roy Loukas. 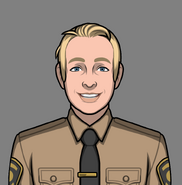 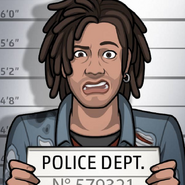 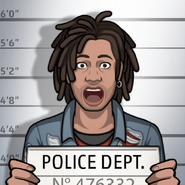 Retrieved from "https://criminalcasegame.fandom.com/wiki/Lorenzo_Sims?oldid=467618"
Community content is available under CC-BY-SA unless otherwise noted.