Lola is a 35-year-old famous diva singer of presumably Spanish-American heritage who has long blonde hair and brown eyes.

In her first appearance, then 30 years old, Lola wears two gold necklaces, one being a heart necklace and the other a triangle. She dons a corn colored dress which has white dots as trimming. It is known that Lola has manicured hands, wears pantyhose and uses hair removal cream.

In her second appearance, Lola wears a veil on her head, revealing two pearl earrings. She dons a white wedding dress with a flower pattern from the right side and wears a silver necklace, and has an oil stain on the left side of the dress. It is discovered that she wears contact lenses.

In her third appearance, Lola wears her casual clothes with an "I VOTED" badge on the left side. It is revealed that she handles guns.

In her fourth appearance, she is seen wearing a white shirt with a camouflage kitty print on it, several black and silver necklaces, two black and silver beaded bracelets and a silver bracelet. She has two mosquito bites; one on her forehead and one on her neck, as well silver earrings with red jewels. She is also seen holding a black purse. It is noted that she eats cinnamon rolls.

In her fifth appearance, she wears turquoise makeup and a matching dress with a fish scale pattern. Additionally, she sports gray hoop earrings, a pearl necklace and a predominantly gray headdress decorated with seashells and turquoise coral. It is learned that she drinks absinthe, eats oysters and uses a salt scrub.

In her sixth appearance, she wears a cream-colored dress patterned with red and blue flowers and matching sleeves. She sports a large brown sun hat with a red, white and black plaid stripe. Furthermore, the hat is adorned with a rose and she reverts to her earrings from her fourth appearance. It is determined that she eats olives, uses sunscreen, sweats excessively, uses "Diva by Bucci" solid perfume and drinks champagne.

The Scent of Death

Lola was interrogated again, after Hank's wife Kerry Ann came to attack her. She said Hank was blackmailing her because he wanted Lola to be his cover girl for the latest Love Your Leaks promotion, a feat Lola did not want to have since she suspected this move would hurt her music career. Lola also said that she asked for help from Zack Holden so he could delete Hank's pictures of her on Hank's Friendnet account. Zack said that Lola told him that the pictures were fake, which when the team told them that it was from 10 years ago, and authentic.

Lola was found innocent for the first time after Peggy Buxton was found guilty of Hank's death. Ramirez then admitted to the team that he was a fan of Lola Vallez and that he wanted to meet a famous singer during Lola's leg of the Additional Investigation to study how Lola became successful.

One Wedding and a Funeral

Lola was supposed to marry Walter Fairbanks but her dreams of marriage ended when her groom crashed his plane into their wedding party. Immediately after the tragedy, the team approached Lola regarding about the plane crash but at the expense of enraging Lola's brother Esteban Vallez in the scene of the crime. Lola lambasted Esteban for not liking Walter and for forcing her to invite him to her wedding since she had no choice—an argument that made the team interrogate Esteban right away.

Lola had to talk to the team again when the team questioned her about allegations of Walter's cheating antics. Although Lola and Walter argued about this, Walter would convince Lola to forgive him for the cheating, and in spite of Walter's occasional cheating, Lola would allow Walter to complete the marriage.

When the police gathered enough evidence to prove her brother guilty of the premeditated plane crash that killed Walter, Lola's life would be forever scarred by Esteban's atrocity. It was possible that Lola wanted to marry Walter in order to escape poor treatment from her family. Although Lola knew that she will not be able to marry as of the close of the case, she still wanted to go to the honeymoon spot (as if the marriage was successful) to mourn the death of Walter.

Lola was brought to the investigation for the third time after the team found a one-way ticket to Hawaii ordered for Adam Bentley in which the analysis came up with Lola as the purchaser of the ticket. The team rushed to Lola's mansion and confronted Lola about the one-way ticket to Hawaii. Lola assumed that the team wanted to talk about Adam's murder but instead demand answers for the one-way ticket for Adam Bentley instead. Lola told the team she did it because her seeing Adam was too painful for her to bear after the violent cancellation to her wedding occurred, but Lola told the team she acted out of line knowing Adam dead, realizing she should not have pushed him to Hawaii.

Lola was grilled by the team in her mansion a second time when the team found out she had been giving racy pictures of herself to Zack—Lola did this because she wanted to drive Adam out of Maple Heights for giving Walter a pic of a plane crash, aggravating Lola every time she saw Adam. Lola felt that Adam was a creep of sorts so she wanted to know how to use hand guns just in case Adam lost himself. Lola admitted that she purchased a ticket to Hawaii for Adam but Adam ripped the ticket to shards, refusing to leave Grimsborough for good. Lola admitted that she got in contact with Zack so that Adam would be reported for various harassing endeavors as a socialite though neither Lola nor Zack would commit bloodshed.

Lola was chosen to announce the winner of the elections, and Howard Johnson was announced by Lola as the city's Mayor. Lola was found innocent of Adam's death but at a shocking cost Chief King admitted that he killed Adam, and feeling guilty of what he did, committed suicide, thus all suspects were proven innocent.

Lola became a suspect once again after she called to the police to report the murder. When being asked about the murder, Lola said that when she came by to get an outfit for an interview about her new album, she saw Jordan's body floating in her garden. And when Jones asked her about the victim, Lola said she didn't know him.

Lola was spoken to again about the lizard woman picture which Jordan did for her. She admitted that she had lied about not knowing Jordan earlier and hated him very much. She said that she hired Jordan to take some pictures of her in order to make her look fresh for her new album cover. But Jordan turned her into a lizard-lady and even said that she looked sexier with scales and slime. And when she demanded her original prints back, he refused to return them. Angry at Jordan, Lola said he was a ridiculous man-child and was not sorry he's dead.

Lola was found to be innocent the fourth time after the team incarcerated Anuj Ghosh for Jordan's murder. Later, Lola came to the police station to informed Gloria and the player of the presence of the dangerous fish in her garden.

Lola became a suspect for the fifth time after Gloria and the player found the program of events and learned that Lola was the singer who performed in Celine's big night. After meeting the team, Lola asked them if Celine had really been burned to death. When the team asked Lola whether she saw anything regarding the murder. She denied it and explained that she was too busy belting out her hits. Lola then admitted that Celine's death was really a tragedy, but Celine was very old and she hoped that she would die before she got as wrinkly as Celine. In the end of the conversation, Lola told the team that she hoped she would be picked to perform at Celine's funeral.

Lola was spoken to again after the team found out that she got mad at Celine because she was chosen to be the judge on Grimsborough's Best Talent, a talent show. Lola revealed it had been her lifelong ambition to be a judge on the talent show and she was happy when the producers had told her was a shoo-in for the job. However, she was really mad when she knew Celine was the judge on the talent show and said that Celine was chosen instead of her because she paid them off. Lola then admitted that she wanted to wipe that smug smile off Celine's face with her salt scrub, but she denied killing Celine.

Lola was found to be innocent for the fifth time after the team incarcerated Cliff Montgomery for Celine's murder. Later, the team (per Martine and Ray) discovered that there was a high-pitched Xerdan song which was able to attract all the Demon Fish in the area and stop them hurting people. The team then asked Lola to help them sing the Xerdan song and Lola was happy to help. However, in order to perform in the best way, Lola needed her tuning fork to find the right pitch. The team then searched the mermaid ballroom and finally found her tuning fork. After the team gave it to her, Lola started to sing the Xerdan song and the Animal Control was finally able to trap all the Demon Fish in the city. Lola was then very happy as she saved everyone from the Demon Fish and said that this was gonna be great publicity for her new album.

Lola became a suspect once again after Jones and the player found traces of her signature perfume on Mayor Price's straw hat, which meant Lola and the victim saw each others earlier. The team then came and asked Lola about her last encounter with Mayor Price. After hearing that Mayor Price was dead, Lola asked the team whether they were going to stop serving champagne at the picnic. She then said that she needed to go to get a refill.

Later, a drunken Lola told the team that Mayor Price was a "bitter hag". The team then got her some water and let her sit in the shade.

Lola was found to be innocent for the sixth time after the team incarcerated Ernest Emerson for Mayor Price's murder and for indirectly killing multiple people through the Demon Fish. 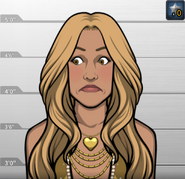 Lola, as she appeared in The Scent of Death (Case #44 of Grimsborough). 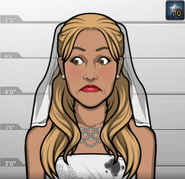 Lola, as she appeared in One Wedding and a Funeral (Case #47 of Grimsborough). 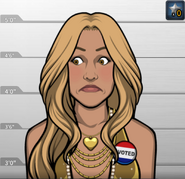 Lola, as she appeared in It All Ends Here (Case #51 of Grimsborough). 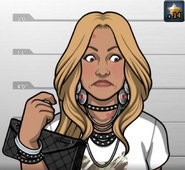 Lola, as she appeared in Muddying the Waters (Case #25 of The Conspiracy). 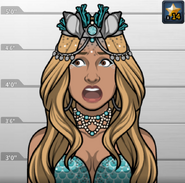 Lola, as she appeared in Light My Fire (Case #29 of The Conspiracy). 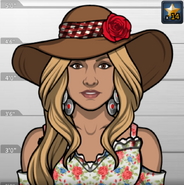 Lola, as she appeared in Blood in the Water (Case #30 of The Conspiracy). 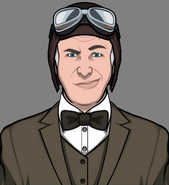 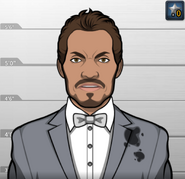 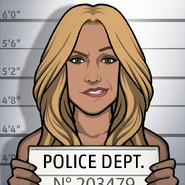 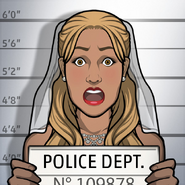 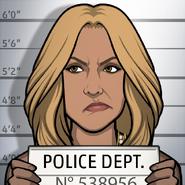 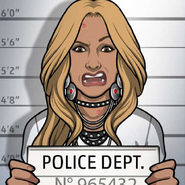 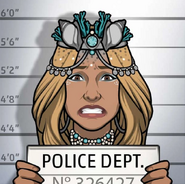 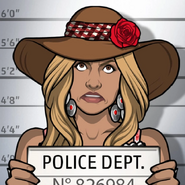 Retrieved from "https://criminalcasegame.fandom.com/wiki/Lola_Vallez?oldid=433680"
Community content is available under CC-BY-SA unless otherwise noted.