Lola Dickinson was the killer of young filmmaker Virginia Watchbird in The White Peaks Project (Case #29 of Pacific Bay).

Lola is a 30-year-old now-former film producer with green eyes and brown shoulder-length hair adorned with brown hair ribbons behind her ears. She wears a black leather jacket over her terracotta t-shirt. She also dons a lime green scarf with two pom-poms. Besides that, she sports a silver necklace, a pin which takes the shape of a video camera, and is seen holding a Pearpad (the in-game iPad clone). It is known that Lola eats pumpkin soup and takes sleeping pills.

Lola found herself in trouble after the team of Frank and the player watched a restored VHS tape in the distillery Virginia was working at, in which the victim thanked Lola for the opportunity to film a documentary about the origins of a "masked creature" known as the Night Walker.

Lola told Frank and the player that they had to be quick in their discussion as she poured a lot of seed cash into the Night Walker project. Lola knew no one was more enthusiastic about the Night Walker than Virginia in spite of her opposition of filming the documentary in the dark woods alone. Frank's recap suggested that Lola was concerned about the money loss as a result of Virginia's death.

Lola would be due for a second conversation with Frank and the player after Hannah analyzed a BlackBear phone belonging to the film producer. Hannah scanned through Lola's phone and noticed a message Lola had sent to Virginia, in which she informed the victim she wanted to produce the film her way, suggesting that neither Lola nor Virginia saw eye-to-eye.

Frank told Lola that Virginia and herself were not eye-to-eye during the documentary, but Lola wanted to add horror and blood to the documentary, although she was more concerned about the project's impending failure as the clock was ticking. Lola was not able to finish the Night Walker project Virginia started as she was found guilty of grand homicide after the killer's attributes incriminated her as the young filmmaker's killer.

Lola stated that she intended to finish a documentary about the Night Walker's existence but at the condition of having Virginia alive, but Frank had to cut off Lola for a moment to prove her guilt due to evidence found in the murder investigation including but not limited to her blood found on the pocket knife Virginia used to fend for herself before she was murdered. Lola thus admitted to grand homicide and explicitly made it clear that it was an accident, so she explained what happened before to both Frank and the player.

People in White Peaks wanted historical information about the Night Walker, and in order to simulate this feat, Lola talked to Virginia about the masked creature, but angered the victim every time she talked about it in front of her face. Alas Lola followed Virginia as if she was the Night Walker to instill fear into the victim, resulting in Virginia being terrified due to the Night Walker following her. Lola then revealed herself to Virginia, resulting in the latter stabbing Lola with a pocket knife, forcing Lola to shove Virginia against a tree, but she did not know that the amount of force she exerted impaled Virginia. Frank thus made it clear to Lola that she lied to both the player and himself, so the player shipped Lola to face trial.

Lola told Judge Dante that Virginia would be remembered for the work she had done for the Night Walker documentary, deducing the murder made the victim a part of the Night Walker legend, to which Judge Dante was disgusted since he believed Virginia was entitled to a road of opportunities which Lola denied through an act of murder. Judge Dante decided thus that the murder was not an accident as Lola originally thought it was, so he gave the film producer a 25-year jail sentence for the first-degree murder of Virginia Watchbird. 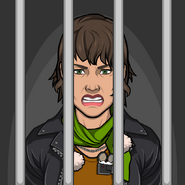 Lola, sentenced to 25 years in jail for the murder of Virginia Watchbird. 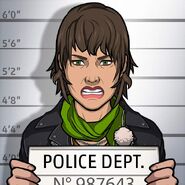 Retrieved from "https://criminalcasegame.fandom.com/wiki/Lola_Dickinson?oldid=494164"
Community content is available under CC-BY-SA unless otherwise noted.