Lizzie Dion was the killer of her boyfriend, artist Fabrizio Gallardo, in The Ship of Dreams (Case #37 of Pacific Bay).

Lizzie is a 25-year-old now-former Ivywood actress. She is seen wearing a silver headband in her brown hair, and she has blue eyes. Lizzie is also seen with a silver necklace and golden earrings. She wears a badge depicting the Gigantic liner on the left side of her Victorian-style dress and the emblem of an infamous cult on her right side. It is known that Lizzie has a cold, knows Morse code and eats caviar.

Lizzie was first approached by Frank and the player when they were able to identify her on a painting Fabrizio Gallardo had made. The actress had expressed some shock when she was told that the artist was dead, and she went on to say that whenever movies were made about real catastrophes, bad things would happen to those involved, believing that the movie was cursed. Her interrogation ended when her fiancé entered the scene and interrupted her to lambaste the player in talking to her without his permission.

Lizzie was questioned again when the team found two tickets for a getaway to Italy. The actress admitted that she did have an affair with the victim, and Fabrizio had bought the tickets for Lizzie for them to be free as two love birds. Before meeting the victim, the actress was focused on being pretty and eating caviar, but Fabrizio showed her the beauty of simple things. However, Lizzie admitted that her story was just a dream and that she belonged with Tyler Snakes, her fiancee.

Lizzie was ultimately found guilty of grand homicide when all the criteria incriminated her as the killer of Fabrizio Gallardo.

As Frank and the player confronted Lizzie, she pretended that a false arrest was being made; however, after Frank stated out the killer's trail very cleverly, the actress confessed her guilt before claiming that she committed the crime only in revenge for Fabrizio impregnating her prior to the events of this case. She then proceeded to add details to her statement. Both Lizzie and Fabrizio loved each other, but the latter's low financial status – which was the reason as to why it took him months to buy plane tickets to Florence for the couple – made Lizzie regret for pretending that she could escape with Fabrizio in the first place. However, the wake-up call was when she found out about the couple's baby in her womb. Realizing that she had to do something to save her career, not to mention her engagement to Tyler Snakes, Lizzie killed Fabrizio to preserve her values. After the statement, Frank took some time to loathe Lizzie's disgusting act since her child would grow up an orphan now. Nonetheless, the player shipped the actress to trial right away.

In court, Lizzie stated before Judge Dante that her career in Ivywood was far more important than a getaway to Italy with Fabrizio. This prompted Dante to ask Lizzie if those third class tickets were the driving force behind her decision to kill Fabrizio, to which the actress replied that she had higher standards in spite of the artist impressing her with tickets to Italy. The motive seemed deceiving, but to conclude, Judge Dante simply issued a 20-year jail sentence for Lizzie. 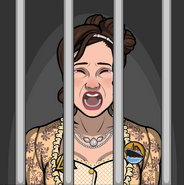 Lizzie, sentenced to 20 years in jail for the murder of Fabrizio Gallardo. 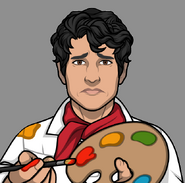 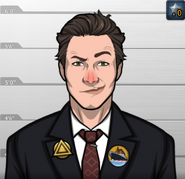 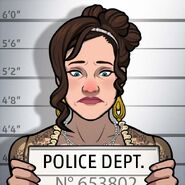 Retrieved from "https://criminalcasegame.fandom.com/wiki/Lizzie_Dion?oldid=535770"
Community content is available under CC-BY-SA unless otherwise noted.