Lisa Edwards was the victim in At the End of the Rope (Case #35 of Grimsborough).

Lisa was a Grimsborough University student. She had red hair and green eyes. At the time of her death she wore a white shirt underneath an olive green sweater along with a pleated skirt and black school shoes.

Jones and the player found Lisa hanging from a noose in the University's library. Assuming a suicide, they then sent the body to Nathan who could not find signs of a murder from the wounds on her neck. He had also noticed a bump on her head, which he assumed to have come from bumping her head against the ceiling when she stood up on the railing. Nathan then confirmed that she had died from snapping her neck after hanging herself.

With the help of cinema history professor Luke Harris, the team found proof that it was actually a murder orchestrated as a suicide inspired by the movie The Hanging Murders.

Lisa was always described as withdrawn and quiet. She had been best friends with fellow student Penelope Rivera. In her university, she began making friends with psychology student Tess Goodwin, who was taking the same cinema history course as her. Afraid that she would lose her friend, Penelope sent anonymous bullying messages to her through Friendnet so that she would become afraid of other students and so that Penelope could comfort her. It did not work however, as Lisa began isolating herself even more despite Penelope and Tess trying to help her.

The hacker known as "The @rtist" also approached her and offered her help in building a case against her "bullies", but she refused. The @rtist eventually found out that Penelope was behind the messages and told Lisa. This led to a huge fight between the two best friends.

The president of the Anti-Bullying Association, Caroline Fitzgerald, tried to get her to participate in a conference about cyberbullying. When she refused however, Caroline began guilt-tripping her, apparently disappointed that she would "refuse to help other students".

Apart from her personal life, Lisa was known to have been performing poorly in the eyes of Professor Harris, who thought she did not have enough creative talent or maturity for the movie industry. Professor Harris, however, shot her down rather harshly, which may have led to more negative feelings brewing up inside her.

The killer turned out to be Penelope.

Penelope admitted that her plan to get closer to Lisa through the Friendnet messages did not work, leading to her getting thrilled at Lisa calling her to the library. Lisa then confronted her regarding the messages, calling her a "monster" and a "controlling freak". Having enough of Lisa's angry remarks, Penelope had pushed her, knocking her unconscious. Seeing the rope, she "knew what she had to do" and set up the murder as a suicide just like in the movie they had watched. Judge Hall sentenced her to 10 years in jail with eligibility for parole in 6 years.

The team eventually found out that Penelope was one of the killers who were hypnotized by Tess to kill against their own will by taking advantage of their insecurities. 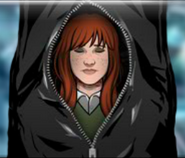 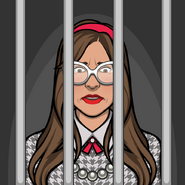 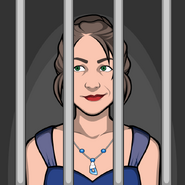 Tess Goodwin, the late mastermind behind Lisa's murder.
Add a photo to this gallery

Retrieved from "https://criminalcasegame.fandom.com/wiki/Lisa_Edwards?oldid=476657"
Community content is available under CC-BY-SA unless otherwise noted.