Linda Lovara was a suspect in the murder investigation of company director Gordon Michelli in Death by Crucifixion (Case #7 of Grimsborough).

Linda is a 62-year-old woman who has flowing untidy gray hair. She has one green eye and one gray. Her face also features many spots above her gray lips. She wears brown feather earrings, and an assortment of jewels around her neck. She also wears a dark gray top and an orange long skirt. It is known that Linda is a Christian, drinks whiskey and takes Nevrax.

Linda played the role of a mad woman who lived in a broken car park in an abandoned parking lot. When Ramirez caught Nikolay Woloch vandalizing the crime scene, he immediately blamed Linda the mad woman. She said that she was acting in the name of God and was lashing out at the company for destroying the church. When Dr. Bishop was convicted, Linda said that she believed his story and would do anything to free him.

Linda was proven innocent after the team incarcerated Dr. Bishop for the murder of Gordon Michelli. 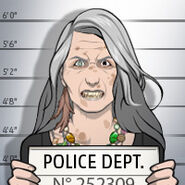 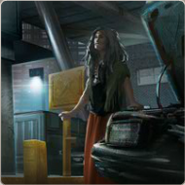 Linda standing beside a broken car in the abandoned parking lot where she lives.
Add a photo to this gallery

Retrieved from "https://criminalcasegame.fandom.com/wiki/Linda_Lovara?oldid=502502"
Community content is available under CC-BY-SA unless otherwise noted.