Lily, a juvenile of 8 years old, is the daughter of Yann Toussaint and Jessica Toussaint, and the elder sister of James Toussaint. She dons a pink dress, black hair, and two side hair buns tied with yellow bows. Besides that, it is known that Agatha Christmas has been babysitting Lily along with James for years.

Lily appeared after her father, Head of Forensics of the Pacific Bay PD Yann Toussaint, completed the analysis of a super rare shrimp with rainbow colors giving the name "Rainbow Star". Lily wanted to keep the shrimp but Yann felt that the shrimp deserved to live under the sea rather than in the dry reaches of his lab, in which Lily realized all living things deserved to live equally per her father's beliefs.

Roger Strout wanted to thank Yann and the player for not only saving his photographic career in the water, but for discovering a rare species for him.

Lily was half-asleep when her mother came into the police station to request the player to help her find her son, James, who went missing whilst looking at the fireworks in the Chinese Parade which re-opened after Nikolai Kamarov's murder case was solved.

Yann took the player on an urgent mission to find James but all they found was a rattle toy at the parade, which eventually led them to Sue Xiong, who admitted she found James and escorted him to the Chinese temple for safety. Yann and the player then headed off to retrieve James from the Chinese temple but only found a drawing of James and Andrew Kamarov during the process.

Knowing Sergei Yablokov would be the one to take care of Andrew (following Nikolai's horrendous death), Yann and the player had to talk to Sergei, but Sergei was surprisingly revealed to have taken good care of both James and Andrew, in which James became friends with Andrew. Although Sergei admitted he would not be a good foster parent to Andrew, he honored Yann's request to take care of Andrew when needed.

Lily did not play much of a role in the case although she, along with her brother James, cheerfully greeted Amy and the player as soon as they arrived to check up on Agatha Christmas, who is known to have been babysitting both Lily and James for years now.

Moments after Joe Stanford's killer was brought to justice, Amy, alongside James and Lily, interrupted a conversation between Frank, Chief Marquez, and the player in order to inform them that Yann left his kids under her care for the time being as he walked out of the station for unknown reasons—prompting Chief Marquez and the player to investigate the issue, which later turned out to be an act of insubordination by Yann as he interrogated Confederate reenactment actor Stanley Bullock in his bid to bring forth "The Puppeteer" (the mysterious serial killer responsible for the death of Yann's parents) to justice.

Lily played no significant role in the case whatsoever as she was only seen sleeping on her mother's lap when Jessica had to intervene Frank and the player's recap of Dinah Cooper's murder investigation in order to inform them about the break-in at the Toussaints residence which was supposedly carried out by "The Puppeteer". 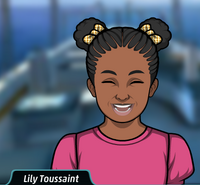 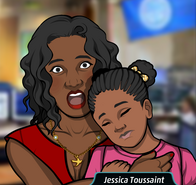 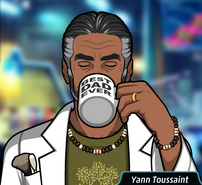 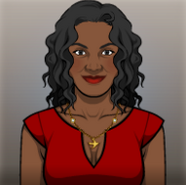 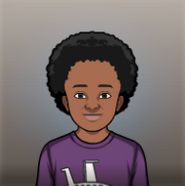 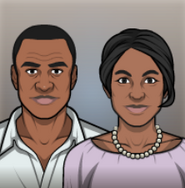 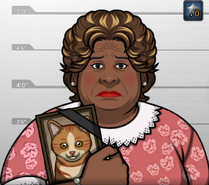 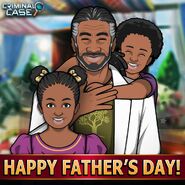 "Happy Father's Day!"
Add a photo to this gallery

Retrieved from "https://criminalcasegame.fandom.com/wiki/Lily_Toussaint?oldid=505498"
Community content is available under CC-BY-SA unless otherwise noted.