In her quasi-suspect appearance, Lily is a 32-year-old rally driver who dons a denim vest over a white shirt.

In her first suspect appearance, she sustains a sunburn and dons a dirty white and black rally racing jacket with logos of the race's sponsors. It is known that Lily eats caterpillars, takes hoodia and knows mechanics.

In her second suspect appearance, her sunburn has healed and the sponsor logos on her racing jacket have changed slightly. It is discovered that she has knowledge about snakes, drinks champagne and eats maafe.

In her third suspect appearance, now a 35-year-old racer, Lily wears a racing suit with a red, blue, black, and white color scheme, as well red lotus drawings on each of the shoulders. It is revealed that she drinks Rocket Cow and vodka.

Marina and the player were looking for information about her after seeing her on a picture with Jonah. After finding hers and Jonah's tickets for bungee jumping, she showed up and explained she was Jonah's sister. Marina was embarrassed, but also surprised since Jonah never mentioned having any siblings; Lily explained she was his half-sister; they shared the same father, but had a different mother. Marina was also surprised to hear that Jonah told Lily about her, and that he would always talk about Marina so much that she could not tell him much.

Diamond in the Rough

Lily became a suspect after the player and Carmen found her skin cells on the victim's canteen flask. She said she was on the Road Rage Rally, and ran into Jude who gave her his flask for good luck. Knowing Jude, Carmen was skeptical he would give his grandfather's flask away like that, but Lily said they were in a relationship teaching him how to survive in the African desert. When informed of Jude's murder, she just simply said they all have to go sometime.

Lily was spoken to again when the team found a smartwatch revealing that the victim was tracking her. She felt the victim was getting too close for comfort, since he kept giving her presents like he wanted her to owe him something. Because of that Lily decided to break up with him, but the victim went mental and started stalking her. Carmen felt the victim was just concerned for her safety, but Lily did not believe it, she even considered using her mechanic skills to mess with his jeep so she could get him off her back.

Lily was found to be innocent after the team incarcerated Olivier Feraud for Jude's murder. However, she was spoken to again about reports from Clayton Rose saying she was snooping around the mines to steal a briefcase with an apple-sized diamond. She said she was on a mission from a sponsor of the 3R race, to grab a metal briefcase and take it to the finish line. She claimed was unaware that the briefcase contained a diamond because she did not ask any questions when she got the favor from the sponsor.

After Lily and Nomena crossed the finish line, she dragged her co-driver out of the car into the road.

Carmen and the player decided to talk to Lily about Nomena. She said Nomena was fine at the start, but passed out halfway through after saying she felt sick. However, she could not stop due to the course being a narrow jungle track, so she had to finish the race in order to get some assistance. When asked about the diamonds the victim had on her, she had no idea about them and said she was lucky to finish the race in one piece with the victim putting her in serious danger.

Lily later accepted the winner's trophy in the art gallery. When Carmen told her she expected more compassion for Nomena from her, Lily promptly said that compassion was not her thing and left the cops.

Lily was spoken to again about a message in the victim's pace notes she wrote saying to do her job or else. She explained that after a week, the victim stopped doing research on the courses, leaving Lily to drive blindly. She wrote the pace notes herself, and left the message so Nomena would start doing her job. After having so much to deal with herself in the race, she questioned whether of not she should feel bad for the victim, and did not even care that her brother was trying to defend her.

Lily was found innocent again after the team incarcerated Lavinia De Brills for Nomena's murder and smuggling diamonds. However, Jonah wanted to fix things with her, and he and the player managed to catch up to her before she left for Brazil. She was thankful they managed to find her plane ticket as she almost missed her flight. Since she won the 3R, she felt there was nothing left for her there, and since she was upset, she decided to go to Brazil. She then said farewell to the player and Jonah, and said she would call her brother whenever she could.

Lily became a suspect for the third time after Luke and the player discovered that her name had been scratched on the trophy plaque. Assuming the guise of accident investigators, they told Lily that they were looking into the crash. She explained that she was facing off against Jerry and that it was the first big race of his career. In order to prove that he would have to work hard to win, she put her name on the trophy. She then suggested that the team searched the garage that serviced Jerry's car.

Lily was spoken to again about her breakup with the victim. She told the team that Jerry had broken up with her the day before the race, prompting her to drown her sorrows in Rocket Cow and vodka. She then revealed that she was not glad that he was dead because she would never be able to have the satisfaction of beating him.

Lily was found to be innocent for the third time after the team incarcerated Ralph McKenzie for Jerry's murder. Later, Luke and the player asked Lily to sign Luke up for the race at Bonneville. They told her that mechanic Maylin Park had lent one of her cars to Luke and asked for some safety gear. Lily told him that he needed perfectly-fitting gloves and suggested looking around the garage for a pair.

After appropriately suiting up for the race, Luke and Lily raced against each other. Despite Lily having a slight lead, Luke managed to overtake her and won the race by a photo finish. Luke offered to rematch her sometime in the future, which Lily accepted. 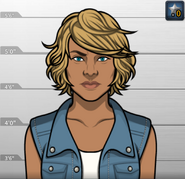 Lily, as she appeared in Kicking the Bucket (Case #39 of World Edition). 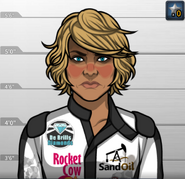 Lily, as she appeared in Diamond in the Rough (Case #40 of World Edition). 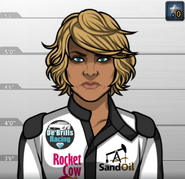 Lily, as she appeared in Going the Distance (Case #41 of World Edition). 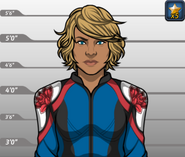 Lily, as she appeared in Dead Heat (Case #12 of Supernatural Investigations). 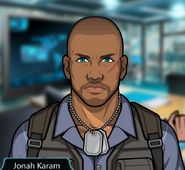 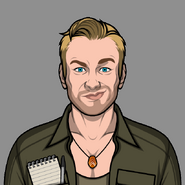 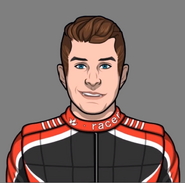 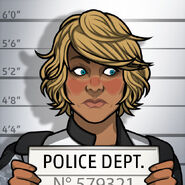 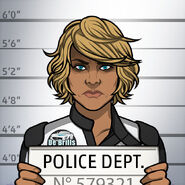 Retrieved from "https://criminalcasegame.fandom.com/wiki/Lily_Karam?oldid=519916"
Community content is available under CC-BY-SA unless otherwise noted.