Lily Bennett (1921-1974), appearing as an unseen minor character in Criminal Case, was mentioned during the events of Into the Vipers' Nest (Case #11 of Grimsborough).

When Lily died, Sam was so upset, he threw away many of his old army possessions and fortune. Many years later, during the investigation into the murder of Salvador Cordero, Jones and the player found a knife which belonged to a certain Samuel Bennett. They discovered that Samuel Bennett was actually One-Tooth Sam, who later told them that he was once rich. After Tony Marconi was arrested for the murder, Sam decided to dig up his past. He enlisted the team's help and sent them into the sewers to find a metal box. There, Jones and the player found jewels inside the metal box. They then gave it to Grace for analysis. After completing the analysis, Grace told the team that the jewels were real and they really did belong to Sam, who once again became rich. 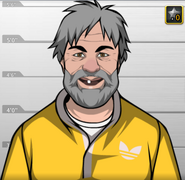 Samuel Bennett, Lily's husband.
Add a photo to this gallery

Retrieved from "https://criminalcasegame.fandom.com/wiki/Lily_Bennett?oldid=408544"
Community content is available under CC-BY-SA unless otherwise noted.