Liam Hall was the killer of COSMORUS head of project management Darya Chernova in Moscow Mole (Case #13 of World Edition).

Liam is a 26-year-old expatriate from Britain. He has short red hair and dons a black suit and tie with a Russian gold coin necklace around his neck. He also has a bandage on his left hand. It is known that Liam eats beef stroganoff, drinks vodka and reads Tolstoy.

Liam was first interrogated after he was identified on a picture of him with the victim. He explained it was just a dinner between friends, and she always invites him instead of her husband due to him showing her up. When informed of Darya's death, he said he would miss the time they spent together, preferring the company of an older woman.

Liam was interrogated again regarding the shirtless selfie he sent to the victim via phone. When Jack suggested he killed her because she refused to pay for his services, Liam said the victim was pleased with his performance and paid him handsomely. He did say he did not expect their relationship to end with Darya's sudden murder.

At the climax, Liam was revealed to be Darya's killer. After Jack pressed the evidence against Liam, the latter explained that he and Darya went out for dinner the night she was killed, and they both drank a lot of vodka. All Liam remembered was him walking with the victim through Red Square when they started arguing. Liam then explained that Darya wanted him to drop off a briefcase, but he did not know what was contained in it. He blacked out, and he woke up the next morning with no memory of what happened after the argument while earning a gash on his left hand.

Liam pleaded guilty to Judge Adaku, claiming that it was an accident. The judge agreed with Liam’s story in that the murder was not premeditated, and he sentenced the accused to five years in prison.

Afterwards, Liam told Jack and the player that the “encounter” he and Darya had was supposed to be her biggest drop-off yet, but she knew the MGB was on her trail. Knowing that it was risky for Darya to carry on with her plan, she approached Liam. However, Liam had no idea who was supposed to pick up the briefcase, but he suggested that the team look in Red Square since that was where Darya had done her previous “encounters”. 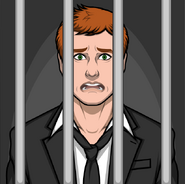 Liam, sentenced to 5 years in jail for the murder of Darya Chernova. 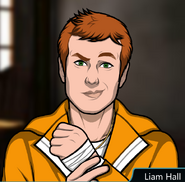 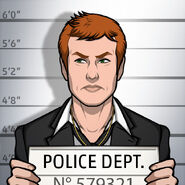 Retrieved from "https://criminalcasegame.fandom.com/wiki/Liam_Hall?oldid=408556"
Community content is available under CC-BY-SA unless otherwise noted.