Let Me Down Gently

Isaac Bontemps (All Chapters)
Maddie O'Malley (All That Glitters... 1)

Let Me Down Gently is a case featured in Criminal Case as the seventh case of Mysteries of the Past (Season 4) and the one-hundred seventy-eighth case overall. It is the first case to take place in the Elysium Fields district of Concordia.

The Squad was invited to a soirée held by Mr Alastor at the Elysium Fields lighthouse, the first of six he would hold. A drunk Maddie spotted the battered body of Lucrezia Capecchi on the shore after the party, prompting Isaac and the player to investigate. The team deduced that Lucrezia was pushed from atop the lighthouse.

During the investigation, Lucrezia's father and mafia leader Vittorio Capecchi found out about her death and threatened to kill the murderer. Later on, the team had to prevent a mysterious gentleman called Diego del Lobo from fleeing the lighthouse. They gathered enough evidence to arrest banker Jordan Wilson for the murder.

Jordan denied involvement but soon admitted to the crime. He and Lucrezia were having a romantic relationship. When she first contacted him, she sent him a picture of her sister, Giulietta, to hide her scars and attract him. When they got to know each other atop the lighthouse, Jordan was disgusted with Lucrezia's real appearance and wanted to leave, but Lucrezia grabbed him. Trying to free himself, he accidentally pushed Lucrezia out the window. Judge Takakura sentenced him to 20 years in jail.

Post-trial, Chief Wright wanted Isaac and the player to investigate del Lobo's suspicious activities. Del Lobo said he had been on top of the lighthouse, where the duo investigated to find his cloak with an invitation to another soirée. Per Evie, the aforementioned party involved a séance at the Concordian Museum of Art. The duo then reported their findings to Chief Wright.

Meanwhile, Giulietta requested to talk to Maddie and the player. She said that director Dolly Darnell had mistreated Lucrezia per the sad entries in the latter's diary. They investigated the reception and found a belt, which (per Charlie) was used to administer electric shocks to the user. Dolly admitted to use it on her actors to make their work authentic, to which Maddie said she would make an officer audit her studio.

After the team returned the handprint mold Giulietta had made with Lucrezia to her, Chief Wright got tickets for Mr Alastor's soirée at the Museum of Art.

Arthur Wright
Add a photo to this gallery 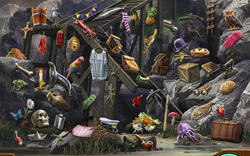 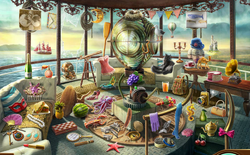 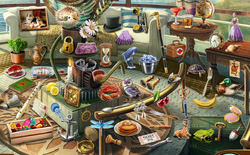 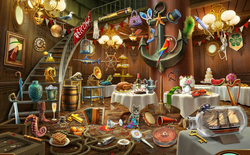 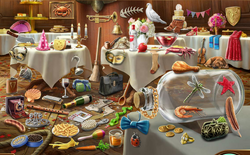 Buffet Tables
Add a photo to this gallery

Retrieved from "https://criminalcasegame.fandom.com/wiki/Let_Me_Down_Gently?oldid=477112"
Community content is available under CC-BY-SA unless otherwise noted.