Maddie O'Malley (All Chapters)
Justin Lawson (1 task in All That Glitters... 4)

Let Her Eat Cake is a case featured in Criminal Case as the tenth case of Mysteries of the Past (Season 4) and the one-hundred eighty-first case overall. It takes place in the Elysium Fields district of Concordia.

Maddie and the player attended Mr Alastor's fourth party, a picnic in Prospect Gardens. The two went to the picnic lawn, only to find Lady Georgina Upperton poisoned.

Mid-investigation, Lady Highmore, the owner of Prospect Gardens, cried to Chief Wright about the murder despite the team's efforts to make the investigation discreet. The team later made Concordian Mayor Cornelius Castletown a suspect after finding his gun. Shortly afterward, Elisa Melody, the party planner, told the Squad that Mr Alastor had sent her a telegram telling her to immediately end the party. The team then found enough evidence to arrest poet Ernest Swanswaddle for the murder.

Confessing to the murder, Ernest said that Georgina turned him down after their romantic summer due to his lack of wealth. When Ernest became rich and famous due to his poetry, he approached her once again, only to get told that he was not a good suitor, that she would rather kiss a frog. Seeking revenge, Ernest stole the cyanide crystals prescribed to Lady Highmore and poisoned a frog-shaped cake which Georgina would later eat. In court, Judge Takakura sentenced him to 15 years in prison.

After the arrest, Justin Lawson and the player went to Elisa to get leads on Mr Alastor. She said that all her instructions from Mr Alastor's letters and telegrams were in her lost purple notebook. Furthermore, despite not being involved in the next party, she said that Mr Alastor would print his next invitation on "something unusual".

Maddie and the player found Elisa's notebook on the picnic lawn, which they sent to Evie, who found a message saying, "every sinner punished for hurting h". The team deciphered that all four murder victims in Alastor's parties have hurt one person in particular.

The two then went to Lady Highmore to find out who that someone was. Not remembering anyone in particular, she gave them permission to search her salon, where they found a picture of young Philomena and Giulietta Capecchi. Knowing Giulietta's connections to Philomena and Lucrezia, the cops talked to Lady Highmore, who said that Georgina had snubbed Giulietta for being a mobster's daughter and that Jack had never repaid the money she had lent him.

Meanwhile, Maddie and the player found a strange machine in the party tent, which they sent to Charlie, who said that the machine mixed liquids to make various refreshments. He also found a coin with the Gigantic on it jammed in the mechanism, which led the team to conclude that Alastor's party would be onboard the Gigantic the next day.

After speculating on Giulietta's involvement with the parties, the team headed to the Gigantic to attend the party and witness its maiden voyage. 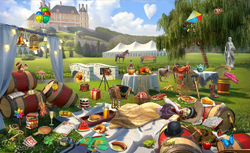 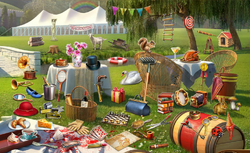 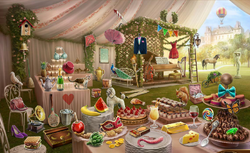 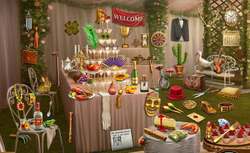 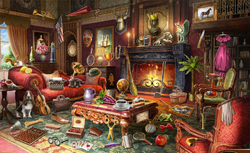 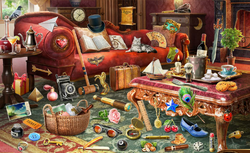 Fireplace
Add a photo to this gallery

Retrieved from "https://criminalcasegame.fandom.com/wiki/Let_Her_Eat_Cake?oldid=474051"
Community content is available under CC-BY-SA unless otherwise noted.