Leonardo is a 63-year-old renowned artist, scientist, and polymath originating from Florence. He has brown eyes, long flowing gray hair and facial hair. He wears a red tunic with dark blue sleeves with a lining of brown fur as well as a matching blue beret and a golden pendant. He is often seen carrying a white-feather quill. It is known that Leonardo knows anatomy, plays Triumph and has low blood pressure.

Seeing that T.I.M.E. had not picked the team up although they had sent Chief Scott a letter and had set up the homing beacon, the team decided to prepare for their backup plan. When asked for it, Kai insisted that the coding formula of the time machine was sabotaged. He then asked the team to get "Ruminations On Time", the treatise Leonardo wrote in 1512 on which time travel was based, for him to understand the formula. By using S.A.R.A.'s network, the team found out that the treatise was recently auctioned off to Hollywood actress Lorna Westerberg.

After arresting Lorna’s killer, the team discovered that she had bought the treatise for Soviet ambassador Lev Romanov, who had brought it back to the Soviet embassy. They were then able to get catburglar Nicoletta Marconi teamed up with the team to steal the treatise, being asked to meet her outside the embassy in three days.

There, after the arrest of Lev’s killer, Nicoletta told the team that she had found the treatise and kept it behind some bushes in the embassy driveway. Unfortunately, the pages with the needed formula were missing. The team then decided to travel to the Renaissance to get help from Leonardo himself regarding the formula.

After arresting Queen Catherine of Aragon’s killer, Penelope and the player asked French musketeer Alexandre Devereaux, who (alongside Leonardo) was working for King Francis I, regarding Leonardo’s whereabouts. Devereaux then informed them that Leonardo never showed up at the French royal court two months prior and that Francis suspected King Henry VIII of wanting to steal Leonardo. Devereaux then suggested them to intercept the communications between the King and his spies.

In the royal palace, the team found a coded message, which (per Orlando) stated that Leonardo was arrested by the Spanish Inquisition. Knowing that the Inquisition had been using violent measures, they rushed to Spain to save him.

Upon the team's arrival in Spain, they learned from Grand Inquisitor Cardinal Cisneros that Leonardo had escaped from the Inquisition. Leonardo later became a suspect after Penelope overheard a rumor that Leonardo was hiding at a local brothel. Jack and the player verified Leonardo's identity and informed him that they wanted to help him. Leonardo recalled how he had been held captive for weeks and tortured incessantly by the victim. After he managed to escape, he came to the brothel to hide, but was about to leave when he learned that the victim frequented the brothel. Jack then told him about the murder and informed him to remain in the brothel whilst they searched the premises.

Leonardo was spoken to again about the tarnished Mona Lisa. He thanked the team for bringing his painting back to him and informed them that Mateo had ripped up the painting in order to hurt him. When he escaped, he gathered the pieces, but failed to restore the painting to its former glory.

Leonardo was found to be innocent after the team incarcerated Isabel Vázquez for Mateo's murder. After dealing with Isabel, Zara and the player informed Leonardo that they were time travelers from 2029. They informed him that he was to crack the possibility of time in the near future and took him to see their time machine. Overwhelmed by the revelation, Leonardo collapsed.

Zara and the player returned to the brothel in order to find Leonardo's medication. After finding his valerian root, they took it to Janis, who administered the medicine, perking Leonardo up. After he recovered, Zara and the player asked him for help in repairing their time machine. While he agreed to help, he informed the team that he had promised King Francis I that he would return to the French court and complete a mural for him, so the team agreed that he was to complete the mural before fixing their machine in order to not disappoint Francis.

Later, Leonardo alerted the team that his progress with the mural had advanced quickly, meaning that he could leave one of his students to finish it so that he could help the team with their time machine.

At the end of the investigation, Leonardo informed the team that he had cracked the time travel code and would be able to fix the time machine. He then suggested to the team that they stayed with him in Florence so that they would not overstay their welcome in the Ottoman Empire.

Upon the team's arrival in Florence, they headed to Leonardo's workshop, where he found a wedding invitation for the marriage between King Henry VIII and his bride, Lady Fiore. Immediately after receiving the invitation, a wedding guest alerted the team to the death of Lady Fiore, prompting Jack and the player to investigate. Mid-investigation, Leonardo deduced that the killer shot from his workshop with his self-created weapon.

After arresting Lady Fiore's killer, Kai and the player spoke with Leonardo, who revealed that he had misplaced his mechanical calculator. After they found the calculator, Leonardo and Kai used their calculations to calibrate Leonardo's prototype time machine. Leonardo explained to the team that, in order to ensure that their calculations were correct, he would make a ten-minute jump into the future with the time crystals Kai provided. When the team was prepared, Leonardo made the jump and disappeared.

Ten minutes later, Leonardo reappeared before Kai and the player, which verified their calculations and meant that they could repair the time machine. Leonardo told the team that he felt inspired and ten minutes younger than the rest of the team.

At the end of the investigation, Leonardo informed the team that it had been an honor and privilege to meet the team and told them that they had inspired him to create a lifetime's worth of inventions. He then wished them safe travels on their way back to 2029. 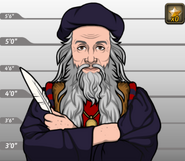 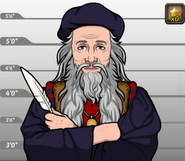 Retrieved from "https://criminalcasegame.fandom.com/wiki/Leonardo_da_Vinci?oldid=527764"
Community content is available under CC-BY-SA unless otherwise noted.