Leo X was the Pope as of 1515 and a member of the Medici family. He had black eyes and black hair hidden under a red and gold mitre. He wore a red papal robe with a white line running down the center and along the lining. He also wore a large cross necklace.

Jack and the player eventually incriminated Grand Inquisitor Cardinal Cisneros for the murder of Leo X's niece, Florentine aristocrat Lady Fiore. They then handed him over to the Pope, who was horrified by his actions. Taking his turn in Cisneros' punishment before the Lord would take His, he excommunicated him from the Church, demanding that he hand over his Bible and rosary within the hour.

Post-trial, Lady Anne Boleyn said that she and King Henry VIII were getting married and the Pope would officiate their wedding. However, she asked Nebet and the player to find the Bible of the Pope as Henry had hidden it. After finding the Bible, Nebet said she would deliver it. Later, Leo X officially wed the couple, wishing all the Lord's blessings showered them and their kingdom with good fortune. 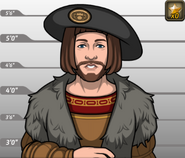 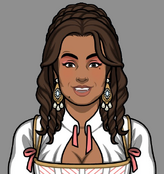 Retrieved from "https://criminalcasegame.fandom.com/wiki/Leo_X?oldid=499245"
Community content is available under CC-BY-SA unless otherwise noted.