Leo Brooks was a suspect in the murder investigation of movie producer Horace Foster in Wild Wild Death (Case #33 of Pacific Bay).

Leo is a 38-year-old studio accountant whose job function is simply a liaison between the studios and the producer working in an entertainment project as far as budgetary decisions are concerned.

Leo has brown hair with hints of gray at the sides, and wears a pair of full-rimmed circular glasses. He dons a green plaid coat over his white business suit which is adorned with a black tie with mathematical symbols on it. He also sports a calculator in his right pocket and a red polka-dot handkerchief which he often holds to his forehead. It is known that Leo wears cowboy boots, plays poker and drinks tequila.

Leo found himself in trouble after Frank and the player found an accountant letter inside the late producer's mansion which took Hannah's intervention to track him down. All Hannah knew was that the message suggested Horace was transferring money from Abitbol & Sons Studios to his personal bank accounts, but when Frank required Hannah to get to the point, she told the team to subdue Leo, making him a suspect in the murder investigation.

Leo suggested that Horace had wanton disregard about Abitbol & Sons Studios' budgetary constraints, and among them were renting a party yacht. Frank wanted Leo to explain what he meant by the "big trouble" in the message, to which the accountant replied that he only wanted Horace to stop his act of reckless spending and to use studio money responsibly.

Leo would be due for a second conversation after Frank and the player found a retaliation letter from Horace demanding that Leo keep all his spending classified at all costs—a feat which suggested that a dispute between Leo and Horace existed. During the interrogation, Leo confessed that Horace would fire him if he didn't keep the producer's spending classified from studio executives. Furthermore, Leo felt that Horace was pushing him over the edge since Abitbol & Sons Studios was the only hope for him to make a living. The accountant also tried to reason with Horace about his reckless spending but failed. Leo was mad at Horace since all disclosed spending had to be done the victim's way, but concluded that he never believed in murder.

Leo was found innocent when an act of financial dishonesty in poker was revealed to be the reason for the hit, but was brought in the middle of a Utopian allegation when Russell found a contract addressed to his father, Jupiter Crane, from Abitbol & Sons. For some reason, Jupiter agreed to rewrite the script for Horace's Western film project The Ornery Die Last on the cult's behalf, and even though Russell demanded the accountant to tell him why, Leo warned the profiler that he was unable to do so because of the Utopians practically controlling Ivywood with an iron fist. Russell's world thus turned upside down after finding out that his father worked with Abitbol & Sons for the infamous cult's benefit. 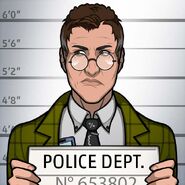 Retrieved from "https://criminalcasegame.fandom.com/wiki/Leo_Brooks?oldid=446805"
Community content is available under CC-BY-SA unless otherwise noted.