Lenny Spitfire was a suspect in the murder investigations of roller derby captain Susie Pickley in Dead Girl Rolling (Case #4 of Pacific Bay) and blogger Becky Walden in The Ice Queen (Case #5 of Pacific Bay).

Lenny is a 36-year-old street performer sporting a flame-design mohawk, tanned skin, a vest with flame designs, a labret piercing, ear stretchers, tanned skin, tattoos, and a blue and green bead necklace around his neck.

In his first appearance, he wears charms around his neck. It is known that Lenny plays the guitar and practices yoga.

In his second appearance, he replaces his charms with two glow sticks, one light green and one pink. It is discovered that he listens to electronic music and uses a GPS device.

Lenny is a street performer primarily serving in the performers' hangout, doubling as a plaza in Ocean Shore.

Lenny was called into the investigation when Amy and the player found a used torch in Susie's gardening bag. The team collected ash for Yann to analyze, and after careful analysis, Lenny was determined as the one who used the torch. Lenny told the team Susie was a regular at the Ocean shore plaza since she needed a place to train for her roller derby matches, and because he admired Susie, gave her one of his used torches. Lenny felt that the police needed more fun in their lives rather than concentrating on homicide, in which Lenny's discussion made no sense to the team.

Lenny was interrogated a second time when the team found his prop box containing a love letter pieced back together showing his admiration for Susie, in which Amy had a bad feeling about Lenny being mentally unstable. Lenny told the team that it was best to write love letters and not send them per his therapists. Amy suggested Lenny to take time off work, but Lenny said practicing yoga helped keep him at ease.

Lenny was found innocent when Barbara Pickley was found guilty of Susie's premeditated murder, but the team found his fire dye at the roller derby rink and returned the dye to him, in which Lenny was thankful for the team. Lenny was also discovered to have made a deal with Mona Middlefinger for a charity play at a hospital in Pacific Bay, something Mona wanted to do to show her soft side. Lenny was able to continue his usual life after the turbulent events of this case.

Lenny would find himself in the red once again when Frank and the player found a blood-stained sword in which a blood sample was retrieved for Yann to analyze. Yann concluded that the blood belonged to Lenny, and the team did not hesitate to talk to Lenny. Lenny told the team that Becky distracted him so much that he cut himself when he was swallowing the sword, in which Becky wanted to embarrass Lenny all the time. This hinted that Becky did not like Lenny as she thought Lenny was a beggar of sorts.

Lenny would be questioned by the team again when they found a torn infographic flyer pieced back together in which Becky told the Ocean Shore citizens not to give money to Lenny, judging him as a beggar. Lenny was very infuriated about the infographic instructing people to stop paying him. He blamed Becky's infographic for people not giving him money, forcing Lenny to consider living his life as a lonely person. Although Becky's infographic proved a detriment on Lenny's standing, it did nothing as Lenny was proven innocent at the climax of the case.

Lenny's monkey (whom he named Billy) was the one who attacked Zack Taylor at the boardwalk, and when Frank returned the monkey back to Lenny, he apologized for Billy's behavior, assuring the team Billy would not misbehave again. Afterwards, Lenny was able to return back to his street performer life. 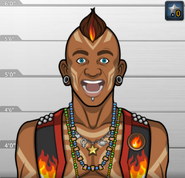 Lenny, as he appeared in Dead Girl Rolling (Case #4 of Pacific Bay). 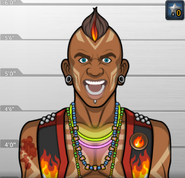 Lenny, as he appeared in The Ice Queen (Case #5 of Pacific Bay). 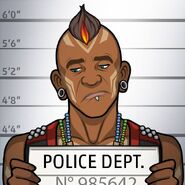 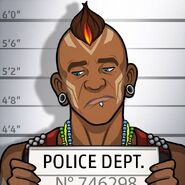 Retrieved from "https://criminalcasegame.fandom.com/wiki/Lenny_Spitfire?oldid=484177"
Community content is available under CC-BY-SA unless otherwise noted.