Leila is a 56-year-old UN high commissioner. She usually dons a black suit with the logo of the Unified Nations pinned to it over a white buttoned blouse, red lipstick, and a blue head scarf covering her brown hair. It is known that Leila takes sleeping pills.

After arresting Joel Heller for the murder of Niilo Virtanen, Leila came in demanding answers regarding the attack. She had trouble believing that Joel was actually working for SOMBRA, despite what Carmen said. She demanded proof of it, thinking they were trying to deflate the US' responsibility in Niilo's murder. Carmen was adamant about SOMBRA, saying she and the player would find the proof she needed.

After searching for proof, the team managed to find irrefutable proof of Joel's cooperation with SOMBRA, in the form of an identity sheet. After showing it to her, Leila said the UN would look into SOMBRA, and set up a committee to approve further research. Jonah said that with a group like SOMBRA, there was no time for a debate, but Leila said it was protocol and that it would be brought together in about six months. Jonah questioned if they could ignore a breach like that for that long, but Leila said that was all she could offer.

Leila became a suspect after the player and Carmen found her business card on the victim's body. She was not aware Natasha was one of the kidnappers, or that she was even a convicted SOMBRA agent, she thought she was a Russian diplomat. She explained Natasha wanted to arrange a meeting between her and the President to discuss tensions between Russia and the US, so she arranged to do negotiations on Air Force One, where the President was kidnapped. Carmen was suspicious she was the accomplice who killed Natasha, but Leila said she just wanted to promote peace between the US and Russia, nothing more.

Leila was spoken to again about an article detailing a US air strike issued by the President over her home town of Arazir. She said it went unmentioned because she felt it was irrelevant to the investigation, but Jack said it gives her a solid motive for wanting President Hewett gone. She went on to say her grief was her own and intended to bring it up in the next assembly, although due to their bureaucratic processes, resolving such issues is difficult to do quickly. However, she would not do anything out of vengeance, because she did not believe in that and only worked for peace.

Leila was found to be innocent after it was revealed that Sarah Bennett was behind Natasha's murder and the President's kidnapping. Once all the loose ends about SOMBRA were tied up, she invited them to a UN assembly, where they were given the UN Peace Prize as thanks for all their hard work towards saving the world. 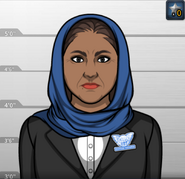 Leila, as she appeared in Double Trouble (Case #52 of World Edition). 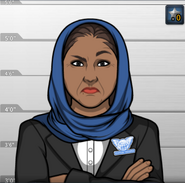 Leila, as she appeared in The Darkest Hour (Case #56 of World Edition). 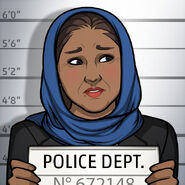