Leah Davies was a suspect in the murder investigation of scuba diver Valerie Green in What Dies Beneath (Case #3 of Pacific Bay).

Leah is a 35-year-old woman with wavy brown, shoulder-length hair and a braid with a green tie on her right side. Leah wears glasses, a couple of bead necklaces, a gold chain, a green shirt, and a beige jacket with a leaf and dolphin emblem on her left side. It is known that Leah uses hand cream, knows scuba diving and drinks champagne.

Leah is an ecology activist politically fighting to save wildlife in the waters of Pacific Bay.

Chief Marquez interrupted the team's discussion with dire news--a bomb was planted at the Pacific Diving scuba diving shop and the team had to put Valerie's murder on hold to remove the bomb from those premises. The place was saved, save for Amy and the player covered in smoke dust. The team pieced the bomb back together, analyzed the bomb through Hannah's observations, and discovered the bomb was created by Leah to scare people, prompting the police to talk to Leah inside the station.

Leah was irate when she had to talk to the police about Valerie's murder but Amy lambasted her about the bomb. Leah then mentioned about Valerie bringing the partygoers to the place of the exotic coral, realizing the party was destroying maritime nature, believing that corals are fragile and needed to be taken care of.

The team found an ice machine furnished to Mighty Pete courtesy of Leah, forcing the player to hack the machine, take some ice cubes to Yann for analysis, only to determine Leah intended to compromise the ice with a laxative, making Amy assume Leah wanted to sabotage the party, prompting a second chit-chat with the eco-warrior. Leah was sick and tired of people not listening to her when it came to maritime nature but realized no matter what idea she came up with, it always backfired. Leah realized that she was a bit too overzealous on how she tried to protect the beauty of maritime nature.

Following Mighty Pete's indictment, Angie Cortez informed the police that a weirdo was trespassing the Big Mighty Yacht, which was still a crime scene despite Mighty Pete's incarceration, and found a toxic waste barrel filled with liquid. The team had to take a sample of the liquid and then allow Yann to analyze the liquid, which was determined to be a cosmopolitan cocktail created by Leah, in which she opted to rent the Big Mighty Yacht to host a gala for the World Coral Foundation, realizing the error of her ways during her interrogation. Leah has finally learned that holding peaceful meetings would create a positive impact to protect maritime nature rather than radical acts of violence. 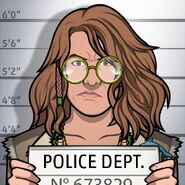 Retrieved from "https://criminalcasegame.fandom.com/wiki/Leah_Davies?oldid=501368"
Community content is available under CC-BY-SA unless otherwise noted.