Lavinia was the 39-year-old heiress of De Brills Diamonds. She had blonde hair underneath a brown safari hat and wore many diamond accessories. She donned a white shirt and flower-patterned marble blue neckerchief underneath a cornsilk brown leather jacket. She also wore red nail polish and lipstick alongside a brown watch on her right hand.

In her first appearance, it is known that Lavinia was knowledgeable about plants, ate nyama choma, and had navigation skills.

In her second appearance, her neckerchief was replaced by a white-and-yellow one made of African fabric. It is known that Lavinia was knowledgeable about snakes, drank champagne, and ate maafe.

At the time of her death, she wore a white undershirt under an orange prison jumpsuit.

The Circle of Death

Lavinia became a suspect after the player and Jack found her flyer for the lodge she was staying in. Beforehand, the team was searching for her, in order to warn her she had become a possible target for SOMBRA. When they finally found her, they immediately informed her that she was in danger, though she believed it to be a mistake. She said the only person she met lately was her safari guide but was shocked to hear of his murder. Despite being a shock, Lavinia claimed she did not know him much as she thought one can only get so friendly with the staff.

Lavinia was interrogated again regarding her ivory brooch since Jack thought it was coincidental since it was discovered that the victim was illegally selling ivory. She explained she got the brooch from her great-grandmother, and it was in her possession for years. And she also said that she was not involved in any elephant killing of that was what they were implying. The victim did offer to sell her ivory, but she refused since that was not why she was in Africa.

Lavinia was found to be innocent after the team incarcerated Nyota Adhiambo for Kariuki's murder. However, she approached the team again with some urgent news; saying someone had been stealing her diamonds. She suspected that the organization they mentioned, SOMBRA, was behind it and had some files repaired, but they were lost. After fixing them, Jack and the player had to speak to her again about the identity of a certain Prince Abioye. She said his name kept popping up as she investigated the missing diamonds, and that the prince was the ruler of an obscure principality. She was meant to track him down in South Africa, but due to the presence of SOMBRA, she decided not to.

Lavinia became a suspect again after the player and Carmen found her fingerprints on a derringer gun found at the art gallery. She was thankful to them for returning her gun, saying she decided to take her personal safety more seriously after being informed of SOMBRA following her. When informed of what SOMBRA was doing to smuggle the diamonds, she felt it was a relief the player was there to end the problem. When it came to the murder, however, she could not recall if she met the victim or not.

Lavinia was spoken to again about a message she sent to the victim saying for her to do what she was told. Despite having drunk a lot of champagne, she said the threat was because Nomena wanted her own car for the next rally race. Carmen was suspicious with Lavinia's proclamation, but she insisted that she was not trying to do anything.

This time, the evidence pointed to Lavinia as Nomena's killer. After denying involvement, Lavinia admitted she was smuggling her own diamonds for SOMBRA with Nomena's help. Nomena then stole some of the diamonds for herself and threatened to expose Lavinia if she did not provide her her own rally racing team. Feeling jeopardized and offended, Lavinia slipped a venomous snake into Nomena's toolbox. Judge Adaku sentenced her to 50 years in jail for the murder of Nomena Leroy, smuggling diamonds, and refusing to cooperate with the authorities.

Later, rally racer Thomas Moulin revealed that Lavinia told him to hide a large number of diamonds until the Bureau mole would pick them up, meaning that Lavinia knew the Bureau mole. Michelle Zuria and the player prepared to interrogate her but Carmen said that she was killed inside headquarters.

Lavinia was found in her cell with a bullet in her head. Angela confirmed that the bullet wound in her head was the cause of death and that the whole murder could not take more than a minute to commit. She also managed to find a chemical residue on the victim's neck, which was likely left when the killer took a pulse. The residue in question was acetaminophen, the active ingredient in painkillers. This meant that the killer took painkillers.

After examining the victim's cell again, a gun belonging to Jack was found. Since the bullet was already confirmed to come from that gun, it was filed as the murder weapon. According to Lars, he mostly found Jack's fingerprints and DNA on it. However, there was also a tiny fragment of DNA from a woman on the gun's handle. Since it was likely that it was left by the killer, this meant the killer was female.

Carmen was the one in charge of escorting Lavinia to her cell after her trial. Lavinia had also slept with Jack after he had gotten drunk in Kenya in sorrow over his recent breakup. Chief Ripley had met up with Lavinia in Nigeria prior to her arrest to strike up a deal with her, convinced that she was aligned with SOMBRA even though she had no proof.

The killer turned out to be the Bureau's Coroner, Dr. Angela Douglas.

Angela tried denying being the mole but was cornered when Michelle brought up Aristide. Angela said that she had been SOMBRA even before she joined the Bureau and that no one knew about it, not even her own husband. Angela said that she genuinely helped the Bureau while providing SOMBRA with the information they needed. However, Angela suspected that SOMBRA wanted her dead after Aristide tried to shoot down the plane because they thought she was too loyal to the Bureau. She hired Lavinia to orchestrate a diamond smuggling operation as a last-ditch effort to prove her value. In her trial, Judge Adaku confirmed that Angela had helped Lavinia kill Nomena Leroy by providing details about the rhino viper. She was sentenced to life in prison for the murder of Lavinia De Brills, being an accomplice in Nomena Leroy's murder, conspiracy with a terrorist organization, and abusing her powers as a member of the Bureau. 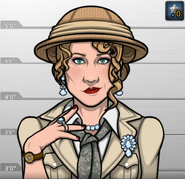 Lavinia, as she appeared in The Circle of Death (Case #38 of World Edition). 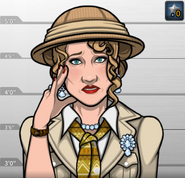 Lavinia, as she appeared in Going the Distance (Case #41 of World Edition). 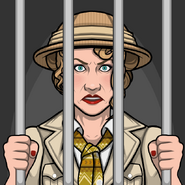 Lavinia, sentenced to 50 years in jail for the murder of Nomena Leroy and for smuggling diamonds. 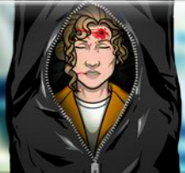 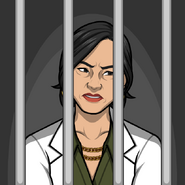 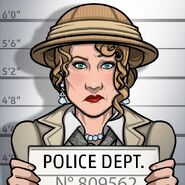 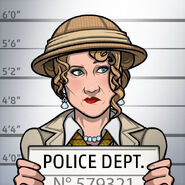 Lavinia in a "Caption the Scene" photo.