Laura Harrington was a suspect in the murder investigation of her boyfriend, golfer Tony Webb, in Drive, Swing, Die (Case #46 of Grimsborough).

Laura is a 27-year-old professional golfer with long black hair somewhat ponytailed to a bun who sports a hot pink golfing visor and a hot pink golfing polo. It is known that Laura plays golf, drinks wine and uses strawberry soap.

Laura was called into the investigation after Jones and the player found a meeting note about Tony meeting with someone. After the team investigated the sauna of the thermal baths, they found Laura walking. She seemed very alike to the woman on the picture, so they went to talk to her.

Laura revealed that she was in a relationship with Tony at the time of his death. Laura met Tony at a charity event, in which Tony was willing to train her. The relationship cooled down when Tony was focused on his career, and when Laura caught Tony cheating on her, but Laura believed Tony to be a soulmate, as she was a forgiving woman to Tony.

Laura was placed in the interrogation room for the remainder of the case. The team found one of her contracts with a strawberry soap brand along with Tony Webb's notes on them. The police told Laura that those threats were directed towards her. Laura wanted to end the relationship to prevent herself from being involved in a womanizing scandal, but Tony attempted to prevent Laura from having a golfing career of her own by cutting off connections to her sponsors, which meant that the victim was very possessive of women.

Even with Tony's attempts to shut Laura's career down, Laura was found innocent at the climax of the investigation. 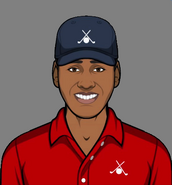 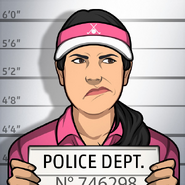 Retrieved from "https://criminalcasegame.fandom.com/wiki/Laura_Harrington?oldid=408546"
Community content is available under CC-BY-SA unless otherwise noted.