Laura is a 31-year-old tour guide of the Grimsborough Museum underground cistern. She has black eyes and black hair in a ponytail. She is seen wearing a white shirt under a red raincoat. She also wears a tour guide badge around her neck, a earpiece with a microphone attached and is seen holding a blue flag saying "Follow Me" in sky blue letters.

In her first suspect appearance, It is known that Laura knows Xerdan language.

In her second suspect appearance, it is discovered that she is right-handed, drinks whiskey and has a cat.

Laura became a suspect after Gloria and the player found her map of the underground cistern, a Xerdan excavation site. The team then asked her if she has seen the victim. Answering about this, Laura revealed that Reggie was down the underground cistern all the time and he was very knowledgeable about the Xerdans. Furthermore, she said that living in Old Town is a tour guide's dream. Laura then left, saying that she had to run because a busload of tourists from Pacific Bay had just arrived.

Later, Laura guided the team out of the underground cistern after it started collapsing, she then called Reggie a thoughtless jerk, prompting the team to talk to her again about her insult towards the victim. Answering about this, Laura explained that Reggie had ruined her business by talking so much about Xerda, which made people stop coming on her tours. She believed that she lost income because of Reggie and sometimes thought that he was a regular "klaatu".

Laura was found to be innocent after the team incarcerated Jebediah Cobb for Reggie's murder.

Laura became a suspect again after Jones and the player found her flag in the temple entrance. When the team asked her whether she knew the victim, Laura revealed that Kayla was a tourist who took part in her tour. Laura was then in shock after she knew that Kayla was killed in the sacrificial chamber.

Laura was spoken to again after the team (per Cathy) learned that she was involved in the victim's tomb robbing business. Laura admitted that she was Kayla's accomplice in tomb robbing as she told the victim how to get into the temple after hours. But she was angry because Kayla never split the profits with her although she promised to do so. The team then took her into custody.

Laura was found to be innocent again after the team incarcerated Bruno Camper for Kayla's murder. 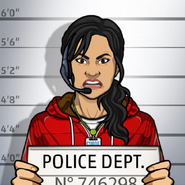 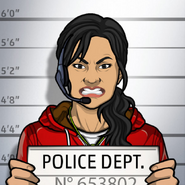 Retrieved from "https://criminalcasegame.fandom.com/wiki/Laura_Crosby?oldid=430225"
Community content is available under CC-BY-SA unless otherwise noted.