Lam Ugyen was a monk who lived at the Tiger's Nest Monastery. He had gray hair and facial hair, had dark brown eyes, and wore a red, yellow, and purple monk's robe at the time of his death. It is known that Lam Ugyen had arthritis.

Lam Ugyen was found near the Tiger's Nest Monastery with his arm chopped off. According to Angela, he died from blood loss after his arm was chopped off. She told Carmen and the player to keep an eye out for an axe, which she thought might have been what was used to kill him. Angela also noticed hesitation chops, believing the killer either had doubts or was inexperienced. She also managed to find traces of chhaang on the victim's wrist, which according to Carmen, is a Bhutanese home-distilled liquor. This meant the killer drank chhaang.

Later at the crime scene, Carmen and the player managed to find an axe covered in blood and a yellow paste. Lars confirmed the ax blade matched the chop marks on the victim, meaning it was the murder weapon. As for the yellow paste, he found it was a mix of turmeric, sandalwood, and rosewater. It was a combination of plants used to treat scars in Ayurvedic medicine, which meant the killer had a scar.

Lam Ugyen had adopted an orphaned girl named Deki and when she grew up, he had married her and forced her to do wifely duties. As the marriage was secret, wandering musician Tashi (who Lam Ugyen had saved once after finding him lost in a mountain during a thunderstorm) was planning to ask Lam Ugyen's blessing for her hand in marriage. Lam Ugyen was known to many as very "unorthodox" in his monkly duties: he had scribbled his face on a sacred thongdrel "as a lesson in non-attachment", forcing festival dancer Druk (whom Lam Ugyen had placed in charge of many aspects of the Tsechu festival he was presiding over) to restart the sewing. He had gotten Guru Om Padmasana, who was in Bhutan for a spiritual retreat, drunk on chhaang. Furthermore, he had scratched Averly Worthington while she was helping his arthritis with holistic medicine.

The killer turned out to be Tashi.

Tashi had discovered that Lam Ugyen had already taken Deki's hand in marriage against her will. In impulse, he then axed Lam Ugyen's arm off. Understanding his motive, Judge Adaku sentenced Tashi to 10 years in jail for the murder. 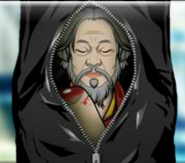 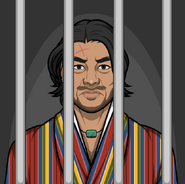 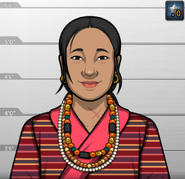 Deki, Lam's adoptive daughter and wife.
Add a photo to this gallery

Retrieved from "https://criminalcasegame.fandom.com/wiki/Lam_Ugyen?oldid=490889"
Community content is available under CC-BY-SA unless otherwise noted.