Laetitia Badu was a suspect in the murder investigation of her boyfriend, politician Sandy Turner, in Up in Smoke (Case #50 of World Edition).

Laetitia is the 25-year-old campaign manager to the victim. She has long wavy black hair, bronze glasses, and a necklace. She dons a cream-colored shirt with an American flag pin on it, and is usually seen carrying a phone. It is known that Laetitia knows electronics, smokes weed, and eats quinoa.

Laetitia became a suspect after the player and Carmen found a clipboard showing the route the victim was to take after the speech, with a last minute change approved by her. She was in a panic, saying the staff was panicking and the movement was in tatters, and there was a lot that needed to be done. She explained the victim was receiving countless death threats, and despite taking precautions never thought someone would actually kill him. When asked about who sent them, Laetitia just said they were anonymous people against the movement, so she threw those threats in the trash. And though she was not sure how this assassin slipped by security, she hoped they would catch them and see that justice is served.

Laetitia was found to be innocent after the team incarcerated Terrance Williams for Sandy's murder. But she was spoken to again regarding what she knew about the USNay movement, which was discovered to have a link to SOMBRA. She was surprised the news said someone at USNay arranged the murder to happen, which surprised Carmen wondering how they got a hold of that info. When asked about the links to SOMBRA, she said from what she found on them they were clean, but they were welcome to view her notes at the rally venue.

Once they found the notes, they discovered one of the sponsors was O.M. MediLab, the pharmaceutical company used as a front by SOMBRA. They decided to inform Laetitia about O.M. MediLab, which confused her since she thought they were a respectable pharmaceutical company. While she did say it would deal a blow to the movement, Carmen said there was not much they could do since they were still seen as a respectable company. 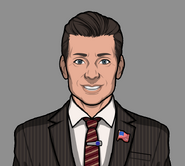 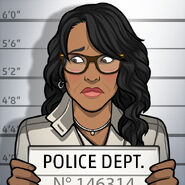 Retrieved from "https://criminalcasegame.fandom.com/wiki/Laetitia_Badu?oldid=408528"
Community content is available under CC-BY-SA unless otherwise noted.