Kurt Leary was a suspect in the murder investigation of student Aaliyah Banks in Spring Break Massacre (Case #38 of Grimsborough).

Kurt is a 36-year-old cameraman with short brown hair. He has dark green eyes and light stubble on his chin. He wears a necklace with beads and an animal tooth. He is seen wearing a white undershirt underneath a pink Hawaiian style shirt. It is known that Kurt wears flip flops, is athletic and chews gum.

Kurt was a cameraman who was first interrogated after Madison Springer told Jones and the player that he was trying to zoom in on her breasts using his camera. Kurt told the team that he had been filming student parties for years. Jones thought that he was being payed by the students but then he revealed that he was filming for "Babes in Bikinis" and it was broadcasted at night. He then said that he wished he had filmed the murder so that he could sell the footage to the press. Jones answered him that it was not a joke, and then asked Kurt if he had seen or filmed Aaliyah before the murder. Kurt replied and said that he had not, and that his viewers were more interested in the girls who wore bikinis, such as Madison.

Later, Kurt rushed to the station to inform the team that his camera had been stolen and that he was sure that it had filmed Aaliyah's killer. Without hesitation, the team then went to the lake once again to search for the camera. After thorough investigation, they found Kurt's camera, but unfortunately, it was broken. As usual, they pieced it back together and handed it to Alex for analysis. The team then went back to Kurt and questioned him about the images he filmed. He became nervous and ignored the question by asking the team to give him back his camera once they were done and by telling them that he had big plans with that murder footage. The team then replied that they will not give him his camera back since it had recorded the murder of the victim, which was very important for the investigation. This angered Kurt, who replied and said that he really needed that tape since it gave him an idea to produce a new B-movie called "Spring Break Piranhas", and fantasized that maybe Bruce Anderson (a B-movies actor) could star in it.

Ramirez and Kurt were butting heads and Jones told Kurt that the team needed to do some investigation at the beaches of Grimsborough Lake, where they then found an Inkblot Test. The team powdered the writing that did not belong to Taylor, and as a result, sent it to Alex for analysis. After the analysis, Alex confirmed that a serial killer was behind the scenes making three convicts accomplices to the serial killer. The team did not hesitate to tell Kurt to take his video camera business elsewhere after the shocking revelation. 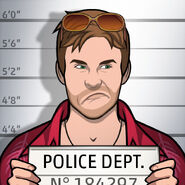 Retrieved from "https://criminalcasegame.fandom.com/wiki/Kurt_Leary?oldid=430352"
Community content is available under CC-BY-SA unless otherwise noted.