Case #22: Of Rats and Men (s2)
Kitty LaBombe (real name Daniel Allan) was a suspect in the murder investigation of his father, escaped convict Scott Lee Allan, in Of Rats and Men (Case #22 of Pacific Bay).

Kitty is a 26-year-old drag queen who wears a large pink wig with long white bangs and plants on the right of it. He is shown to have blue eyeshadow, mascara and red lipstick. He wears a pair of red flower bead earrings and a white dress with flower designed trimming. Below his neck, he has a tattoo of a heart with butterfly wings. It is known that Kitty has military training, drinks whiskey and takes sleeping pills.

Kitty was born as Daniel Allan, and before his drag queen career, he had short brown hair, the same tattoo, and wore a red tartan flannel shirt. He also did not use makeup.

For some reason, Daniel adopted the drag queen identity of Kitty LaBombe sometime in his life.

Kitty was in trouble after Frank and the player heard him screaming from a distance. He told the team about the theater he worked at had a disgusting moment in which an escaped prisoner named Scott Lee Allan was tied up and cannibalized by rats. Frank and the player opted to interrogate him following the team's first visit inside the abandoned theater but Kitty only cared about his appearance in spite of the looting crisis in progress. Kitty saw Scott with the looters at DuBois Avenue, looting shops on sight. Frank and the player opted to investigate DuBois Avenue for clues leading to the capture of Scott's killer.

During Frank and the player's second trip to patch any loopholes plaguing the team's headquarters, the player found a family picture in which the toddler was identified as Daniel Allan. Daniel Allan was revealed to be the true identity of Kitty, much to Frank's horror as he could never imagine the player schooled in psychological aspects of police work. Frank chastised Kitty for not informing the team that Scott was his father but Kitty did not think of Scott as a father as he harbored beliefs of discontent from the misery of having to put up with a sexually-straight orientation policy his father imposed. Scott also tried to send Kitty to military school to avert any possible LGBT traits Daniel acquired as he became Kitty LaBombe, infuriating him. Daniel is the type of person who believes an LGBT lifestyle was the destiny he chose, grounds for a family feud in the Allan family.

Kitty had nothing to do with his father's death once the victim's cellmate was impounded for grand homicide. 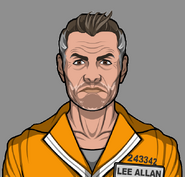 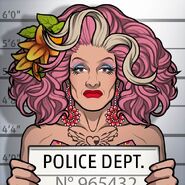 Retrieved from "https://criminalcasegame.fandom.com/wiki/Kitty_LaBombe?oldid=483695"
Community content is available under CC-BY-SA unless otherwise noted.