Kirk De Haan was a suspect in the murder investigation of his distant cousin, history novelist Rosie Gatewood, in The Poisoned Truth (Case #54 of Grimsborough).

Kirk is a 42-year-old man with shaved brown-grayish hair and mustache. He wears a light brown cowboy hat and also a light brown suit jacket with a white dress shirt and a blue tie underneath. On the suit's left lapel, there is a gold cross and on the suit's right lapel, there is a USA flag. It is known that Kirk knows about botany, collects "KILLER CARDS" and practices fencing.

In the midst of Rosie Gatewood's murder, Jones and the player found some startling secrets including but not limited to: a secret cave in which a rotten corpse was found by the team--the team analyzed the DNA of the corpse and sent the DNA to Grace. After careful analysis, Grace confirmed that the DNA belonged to Kirk De Haan, but realized that he also had some traces of Harriet Gatewood's DNA, meaning Kirk was the descendant of Geert De Haan's "miracle boy", so the team went to question him.

When the team told Kirk that there was, according to a DNA analysis, a family connection between his family and the Gatewood family; Kirk angrily answered that he was a descendant of the miracle boy sent by God to Geert instead of a prostitute called Harriet Gatewood. He also said that the DNA sorcery was nonsense, and the only science God approved was botany. This proved Kirk knew about botany. He further said that Harriet was a sinner and that he would challenge anyone who pretended differently to a fencing match. This proved that Kirk practiced fencing.

When the team went to investigate the secret lair for a second time, they found a golden basin. They looked inside it and found a letter containing a death threat from Kirk to Rosie to prevent her from writing her book. When they confronted him, Kirk explained to them that he only wanted to scare Rosie to prevent her from writing her book, but he did not kill her. He then said that the Crimson Order killed her and also said that he admired them as heroes. When Officer Jones angrily replied against it, Kirk countered that the team could not prevent him for admiring the Crimson Order and showed them his "KILLER CARDS" collection, which revealed that Kirk was fond of collecting "KILLER CARDS".

Kirk was proven innocent at the climax of the case when Ashton Cooper was found guilty of grand manslaughter. 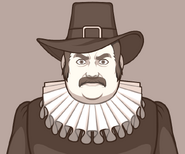 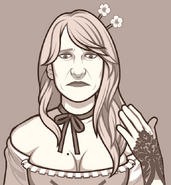 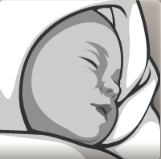 An artwork of the "Miracle Baby", Kirk's ancestor. 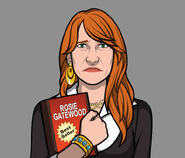 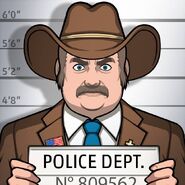 Retrieved from "https://criminalcasegame.fandom.com/wiki/Kirk_De_Haan?oldid=501355"
Community content is available under CC-BY-SA unless otherwise noted.