Kim Aoki (Jpn: 青木．キム) was a suspect in the murder investigation of her girlfriend, shop owner Lucy Campbell, in Fashion Victim (Case #14 of Grimsborough).

Kim is a 29-year-old Japanese girl with brown sunglasses on top of her short black hair. She has green eyes and wears a silver necklace. She dons a strapless brown dress with a transparent veil on her left arm. It is known that Kim drinks Diet Cola and is right-handed.

Kim found herself in the red after Jones and the player unlocked Lucy's phone, which had 10 missed calls from her. Kim was upset after Lucy's death, although the two had a fight among themselves the night before the day of Lucy's death. They had went to The Golden Thimble, a bar, where Kim had left early.

Kim was interrogated again after Biff Wellington revealed that Lucy and Kim were dating, in which she stated that she would never hurt Lucy.

Kim was found to be innocent after cleaner Odell Toole was incarcerated for Lucy's murder. 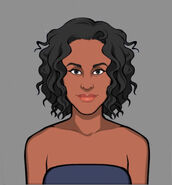 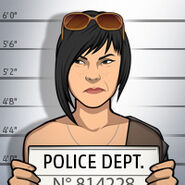 Retrieved from "https://criminalcasegame.fandom.com/wiki/Kim_Aoki?oldid=514155"
Community content is available under CC-BY-SA unless otherwise noted.