Killing Me Softly is a case featured in Criminal Case, appearing as the thirty-third case of the game as well as the city of Grimsborough. It takes place at the University, a district based in Grimsborough.

The player and Jones went to the concert hall to enjoy a Lone Roses concert. After the concert was over, Ramirez informed that there was a dead body inside the drums on the concert stage. After going to the stage, they found the body of Lone Roses' lead singer, Olly Oliver, who was poisoned with strychnine, encased in a drum on the concert stage with a sardonic grin on his face. The killer turned out to be the band's groupie, Mary Lou Hong.

Olly had promised Mary Lou, who kept herself as his secret admirer, that he would leave the Lone Roses and that they would form a musical band as a duo. Mary Lou had also written a few songs for the duo, but then one day, when she revealed herself as Olly's secret admirer, the victim rejected and mocked her. Olly then stole her song and performed it on stage with the Lone Roses. Mary Lou could not bear it and poisoned her former idol with strychnine and stuffed him inside the band's drum after the concert ended. After killing Olly, Mary Lou then photographed the victim's dead body and kept the photo for herself so that she could always remember what she did. Mary Lou was sentenced to 35 years in jail with no chance of parole.

After the trial, Jones and the player checked drummer Riley Davies about destroying his drumset because he got a criminal record and helped diner waitress Irma Anderson find her sauce used for the country burgers. Alex also assisted the player to help comic shop owner Kevin Parker find his Captain Simple figurine. Following the closure of the case, Jones says that he has tickets for a football game next week between the Grimsborough Quails and the Wippeka Armadillos.

Kevin Parker
Add a photo to this gallery 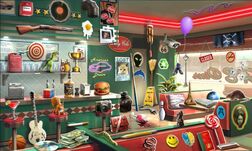 Bookshelves
Add a photo to this gallery

Retrieved from "https://criminalcasegame.fandom.com/wiki/Killing_Me_Softly?oldid=544125"
Community content is available under CC-BY-SA unless otherwise noted.